“At your age you need to be careful to focus on that shoulder,” was the comment from Big John a Level 4 USA NTS Archery coach.  He was right and I knew it. I’d been somewhat aware of the error I’d been making.

The mistake was laziness.  It was easier to shoot having a weaker form.  Doing it right, well I admit, hurt.

I’d slipped into the poor form not from a lack of practice but from an overuse injuries.  I’d strained both my shoulders.  I compensated and shot weakly.

It was clear both shoulders needed rehab.  The joints needed to be strengthened.  I’d been there in the past having more than once injured shoulders in other sports.  This was a first in archery, but an old problem with a familiar ache.

The first step was rest.  Then, slowly followed by more time in the gym.  Eventually the gym time with specific exercises to improve both shoulders was doubled.

As we age we all run the risk of diminished muscle mass.  That can lead to an increase chance of joint problems.  In my 2020 plan there is double the amount of gym time compared to 2019.  Gym training is my least favorite routine but a practice that has on more than one occasion paid dividends.

Certainly, I do not log the miles running and cycling I did before shooting arrows. Nevertheless, I run almost every day and ride up to 6 times a week.  But, I do both to stay fit for archery.

Now, you may be 25 years old and don’t yet see the reason to do either in order to shoot a bow well.  Hear me now and believe me later, your youthful fitness will not last unless  you work to keep it. If you don’t use it you lose it.

If I am going to miss one of the two, running or cycling, during a day it will be cycling.  Running is a demand by River, my lab.  She will herd me out the door.

River is 9 years old and runs as well as she did at 2.  We run trails, which avoid traffic.  We both enjoy it.

Running can pay back in archery tournaments.  Those long hours standing on a range are rough.  There are times I’d rather have been running rather than standing and slowly walking for three and a half to four hours.

Archery over long periods of time takes a mental toll.  As you fatigue from a lack of fitness mental mistakes are more prone to appear.  Running can improve your fitness and may reduce the possibly of an error that is associated with being physically drained.

Heading out to the range to fire off a bunch or arrows is fun.  You will get better shooting a lot.  But, there is a point where you may need to change your training to make improvements.

Reviewing my results, those from training and competition, it was apparent the upward slope had leveled.  In some instances, those data suggested things were beginning to head in the wrong direction.

As frustrating as you’d guess this to be there are ways out of the funk.  Those methods are not as much fun as heading out to shoot. It means getting outside of comfort zones.

With every practice there is a plan.  That plan has evolved little during the past 60 months and 25 days.  The plan has worked fairly well. However, the results after little more than 5 years aren’t satisfactory.

A change has to take place in order to move forward.  In my case, a number of changes.  This meant rewriting the 2020 training plans, establishing new goals, and essentially being willing to drop even more points until the 2020 effort takes hold.

Continuing on the past course would lead to improvements.  Those improvements would take a while. If I were simply shooting for the fun of shooting that would be fine.  But, that isn’t the case for me.

If you’re shooting to win competitions just shooting a bow isn’t necessarily the path.  To win you need to refine the minute steps in your process.  It isn’t always fun. It is like doing intervals running or on a bike.  They hurt and will leave you sucking wind. The the payoff is real.

Outdoor practice as winter approaches is slightly better than when winter arrives. Thankfully, I have an outdoor propane heater, which really helps during chilly morning sessions.  The heater was a gift that I continue to appreciate.

It wasn’t all that cold this morning.  It was 43°F, not too bad. The heater, a hand warmer, and layers of apparel helped. The clothes felt constricting but there’s really no other solution aside from trying to suffer through the lower temperatures while wearing less.  Perhaps those of you, north of the Mason-Dixon Line find this quaint.

Still, practice must continue.  During that training one spectator appeared.  Perhaps he was trying to figure out what I was doing in the cold.  Or he might have been hoping I’d leave his hunting ground and stop being a disturbance. Eventually, we both left.

Georgia Southern University, in Statesboro, Georgia can be a day trip driving from our home near Athens, Georgia.  Making the drive of 170 miles one way isn’t too difficult.  Making the round trip of 340 miles is a tad less fun especially when there’s an archery tournament in the middle of the drive.

The Georgia Southern University Shooting Sports Education Center held an archery tournament in middle of that drive to Statesboro and back to Athens. The Southern Fall Classic was there on November 16th.   I entered but had no intention of a long haul on the road.  I’ve got a camper that is an ideal travel remedy for such events and distances.

I didn’t haul the camper the entire distance stopping at Magnolia Springs State Park near Millen, Georgia for two overnight stays.  Similar to the other Georgia State Parks where we’ve camped Magnolia Springs provided plenty of space, things to do when not shooting arrows, and it was quiet.

Camping, while certainly an activity to have made the trip worthwhile, was the bonus to the archery main course.  Shooting at Georgia Southern is a nice and having once lived in Statesboro and taught at Southern it is nostalgic.

Being less nostalgic and more like Déjà vu was the competition at the tournament. Mainly that Déjà vu meant shooting with and against Paul and Bob.

There was no 60-year-old Masters division at the tournament meaning Bob and I, both past 60, would compete in a younger division where Paul shoots.  Moving down in age group is fine with me.  In fact, I nearly dropped down another age group to avoid shooting against Bob and Paul.  Alas, I stayed put.

The indoor tournament scored 30 arrows at 25 meters and 30 arrows at 18 meters.  Bob and Paul don’t too often make mistakes.  When they do both can brush it off and move forward unaffected. Paul made the fewest errors on this Saturday. In fact, I was leading by 2 points after the 25-meter portion of the competition. Bob made one “opps” shot at 25-meters and I made my fair share of missing it when we moved to 18-meters. Paul remained steady throughout the day.

After all the arrows were shot the top 3 compound bow scores were from Paul, Bob and I.  Paul won by 3 points. Bob and I tied in score and 10 count (39 tens each).  As awards were called it was pointed out that our final placement came down to the 9 count. I was happy for it to have ended there.

After the awards the three of us headed to a bar to watch the Georgia (not Georgia Southern) game against Auburn.  We stayed there until half time. 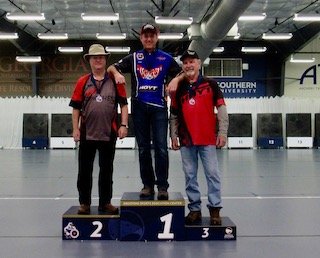 During half time, Paul and Bob headed back to their neck of the State, Savannah.  I headed back to Magnolia Springs where I finished watching the Georgia – Auburn game in the luxury of my camper. It was an exciting game; Georgia won and clinched the SEC East.

On Sunday I packed, hooked the camper to my F-150 and headed home.  I’m making the trip again in a few weeks for the Georgia 25-meter State Championship.  I won’t need to shoot against Paul.  But, Bob will be there.

Aside from Bob, David from Atlanta is likely to make the drive as will that fellow from Brunswick that won the State 5-spot in 2019. Buddy may show up, as might another dozen or so archers that could take the win in December.  All one can do is their best and hope everyone else screws up.

What the heck?  Seriously, what is up with these numbers?

Shooting an Elite Victory 37X with 60-pound limbs adjusted to around 50 pounds seemed a bit like pushing the limit on the bow regarding how much weight to take off the limbs.  I changed limbs and went to 50 pound limbs set for 50 pounds.  I expect to see an improvement in my scores.

The results weren’t what I expected.

The final ten practices using the weight reduced 60 pound limbs shooting a vertical 3-spot at 18-meters my average score was 580. The new 50-pound limbs, after collecting 10 sixty-arrow practice sessions the average score is 565. The arrows were the same as was the release.  The difference is extremely significant, unpaired t-test were t= 3.969 (this means the difference is real).

The variance, however, is currently outside of sight adjustments.  Reviewing the misses, the arrows are evenly distributed around the X. In both sets of numbers there are no single arrow scores below 9.

Time to take the bow and the archer to get evaluated.

We’ve been on vacation.  It was fun.  I could write a lot more about how much fun we had but what’s the point.  It was our vacation not yours.  Writing about our vacation hoping others will read about it and enjoy our experience is like force telling someone about the dream you had last night.

We have some cool vacation pictures and I might share a few of them – although that remains to be seen. What I will write about is  a missed opportunity.

I don’t know what exactly was the opportunity.  I do know I missed the call.  I hate to admit it, but when America called I wasn’t home:

Yes, I know this was a robo call.  Robo calls have led me to keeping my phone in the ‘Off’ position 90% of the time.  I wish the missed call from the United States had been notification that Congress had found a solution to end the public nuisance of robo calls.  Or just have the FCC police the robo callers using public nuisance statutes to prohibit the nuisance.

Alas, it is good to be home.