It wasn’t horribly cold this morning. The temperature was in the low 40s.  It wasn’t bad during my morning run.  I didn’t even notice the wind during the run. Archery was another matter.

Heading out to the range to practice 25 meters I needed to make an about face.  The apparel I was wearing for practice was inadequate for the temperature.  The more I wear the warmer.  The down side is the bulky warmth inhibits accuracy when shooting.

Even with the extra layers for protection against the cold the wind seemed to breeze right through.  After 30 arrows I was miserable.  In addition to being cold the down filled puffy outer vest was snagging my bowstring.  The cold and wind were only adding insult to injury when considering the frustration of warmth versus satisfying shots.

Today’s practice was supposed to be a 25-meter tournament game.  That is a game where I work to duplicate the timing of a tournament. As such, I was shooting a vertical 3-spot the same size as those for a 25-meter event.

By the time I’d competed my ‘warm-up’ shots it was clear I wasn’t warm. Nevertheless, the show was going on.

With only four ends completed it was apparent today wasn’t going to be a highlight of my week’s work.  The colder I got the less accurate I became.

The wind didn’t ease throughout the practice.  I because less careful with the puffy vest.  In fact, my goal for the practice changed.

Initially, I head in mind a specific goal of every arrow in the yellow.  The colder I became the more relaxed the goal – eventually, don’t miss the target face seemed enough.  At both levels, I failed.

On Saturday October 17, 2020 it was 38°F in Acworth, Georgia at 0830.  The weather report had ‘suggested’ the temperature would be 48°F at 0830 with a rapidly increasing warmth to follow.  The weather forecast had been off. It was cold at the Kennesaw Archery Club for the Georgia State Field Archery Championship.

On Wednesday the 14th of October, a day before registration closed I entered the event. The reasoning was to put off entry until nearly the last moment in the event of a forecast to rain or me still flinging arrows like a clown with a water gun.  The forecast for the weather wasn’t the main deterrent for a rejection to enter.  In reality if was the drive through Atlanta being the major issue against attending.

The secondary consideration was whether or not I’d make a fool of myself shooting at $249.00 Olympic recurve in the Men’s Senior Division having only just started shooting a recurve.  In total I’d had 62 days of actual practice shooting an Olympic recurve.  Granted, I believed those days to have been fairly high quality practice days.

The Olympic recurve is a satisfying bow.  At $249.00 for limbs and riser a barging for entertainment.  As a serious competitive bow, well since I’ve not shot any other Olympic recurve is seems just right.  The arrows that are flung off the bow’s rest cost $5.50 each complete with fletching, pile and nock.

Those arrows are a tad under-spined, un-cut, and there is no clicker on the bow.  There is a sight, which is, as sights go, one level above the trash.  I admit openly, the sight is awful. The price for the sight was around $20.00 new.  In this case, you really do get what you pay for.

The sight moves on it own, the aperture rotates between shots, and the calibration assembly aligns “in the ballpark” at best. “In the ballpark” after 62 practice days is probably good enough.

At 0830 there I was, sitting in my Ford-150, at the Kennesaw Archery Club’s range for the tournament.  I was thinking, this is really stupid.  I am going to be so embarrassed. But, I’d made the first leg of the drive (getting there) paid my $35.00 registration fee, so I might as well enjoy, albeit cold, the learning experience.

I unloaded myself from the pick-up, grabbed my introductory level bow and somewhat miserably began the hike to the check-in table. There I confirmed my initial target assignment and walked over to the warm-up range.

Along the way I passed friends and opponents.  This is my first recurve tournament.  I’d won the event in 2019 in the Men’s Masters 60 year old age group using a compound bow.  The recurve contest wasn’t as a Master.  I’d decided to compete for a while in the Senior division.

A friend of mentioned he’s not going to Gator Cup because they don’t have a 70+ division.  Many tournaments bail out of the age group divisions at 50.  I figured I might as will shoot with the guys under 50 since I’m starting something new.  At least there will always be a division in that age group.

There were comments about the in my hand recurve, of course.  There were folks suggest their opinion that the discount equipment was “Good for you.”  Said in the vein of “That’s a piece of crap but maybe you’ll have some cheap fun and not lose too many of those toy arrows.”  There was even the curiosity regarding what happened to the blue rubber tips I’d removed from the arrows to insert the 65 grain pile. One polite fellow, when he mentally digested my bow and arrow set changed the subject to cycling.

Others had more invasive questions. As answered: No, the set did not arrive in the mail zip tied together on cardboard and sealed in vacuum packed plastic. No, this bow isn’t available at Wal-Mart.

Admittedly, the budget bow and arrow set assisted in a good time. The sight was a frustration since it wouldn’t stay locked. It was a minor problem that was dealt with after each arrow.

One thing I will add is the Kennesaw Archery Club has a very nice facility.  Another is Atlanta traffic sucks!

I’ve been shooting a recurve for several weeks.  It isn’t a fancy high priced rig.  It is an Olympic recurve style bow priced at $249.99 brand new off the shelf.  The arrows are Easton Vector 1000s, which are $66.00 for a dozen online.  The event is the Georgia State Field Championship.  I think it could be fun.  Winning isn’t the goal. 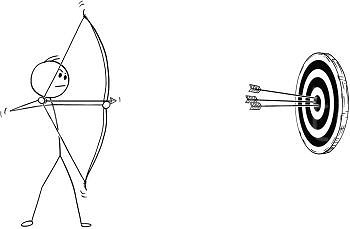 Nope, I think I’ll be pleased to hit every target with every arrow shot.  At this point I am certainly not competitive.  My arrows are under spined; the sight added to the bow rattles loose after every shot and the stabilizers bounce all over the place. I do have a nice tab and decent string.  I’ll also say for $249.99 the riser and limbs seem fine. But, at this point what do I know.

The arrows on the other hand are okay for the price but not really high end.  They are too long for my draw length, which doesn’t matter so much since I don’t yet use a clicker.

The under spined problem isn’t horrible.  The limbs are at 34 pounds.  At my draw length (calculated) I am pulling 32 pounds.  The arrows are labeled for use up to 29 pounds.  (These were represented as the correct spine for 34 pounds upon purchase) Since the arrows haven’t been cut (a matter I’d planned to have addressed on October 6thbut was disappointed when I arrived to learn the person to have had been assisting with this endeavor had forgotten the appointment, despite correspondence less than 24 hours prior to the meeting confirming the meeting) shortening them may just correct the floppy spine. Until then there will be floppy arrows flying out from my bow.

The issue isn’t a problem at 30 meters or less other than an occasion funny flung arrow.  Beyond 30 meters I have to use a version of Kentucky windage to correct the rightward shift.  The real problem is when I overdraw just a tad.  There seems to be a break point where the overdraw (beyond 26.4 inches) when the arrows throw in the towel.

At this point none of it matters. With ten weeks of recurve shooting this upcoming tournament is purely for fun. The biggest hurtle is the drive.

Our next-door neighbor sold his house.  It took only a short time and sold for over the asking price.  It seems like good news that the house sold so fast and the value had increased substantially.  Of course that sent us to Zillow to see what it reported about our house’s potential value.  Indeed, it had risen.

However, we’re not in the market to sale and buy another house.  This means we’ll be getting new neighbors.

A few days ago I noticed one of the new owners outside in her new backyard. They’d not moved in while the interior was being repainted to suit their tastes.  I walked over to introduce myself.

On that meeting I learned the couple, about the age of Brenda and I, were adding a pool, clearing some of the woods for open a parking space for their 38 foot long RV, and putting up a privacy fence.

As my new neighbor explained, the fence was to keep their two dogs at bay not because they were unsocial.  I’d considered the privacy fence and pool then suggested inherent opportunities for nude bathing while avoiding prying eyes.

In fact, she was very pleasant despite avoiding my humour, again lost or ignored by the intended target. She mentioned her husband was overseas and due home soon. Appareltly, making slight off color joke can send up needless alarms. We exchanged phone numbers and I offered my help if they needed it. That exchange left me believing our post-joke conversation had satisfied her that I am safe.

A few days later, at night, I received a phone call from her.  It went like this, “Mr. David, do you own a gun?” I replied, “Yes mam, this is Georgia, everyone owns a gun.”

Indeed, at least one town in Georgia has a law that the head of the household owns a gun and has ammunition for that gun. (1)

The call continued, “Well, we’ve got a rattlesnake out front.  Can you come over and kill it?” she asked.  “I’ll be right there.”

It took a minute or so to get the key to my gun safe, retrieve a .410 shotgun and some snake shot.  Once collected my armament I headed over to shoot the snake.

I’d seen video of people shooting snakes with snake shot.  Large snakes seemed annoyed by the shot.  I’d always felt those were rare cases.  Snake shot did good work on the moccasins and copperheads around us when we lived in North Carolina. I was about to learn a lesson.

When I met the snake it wasn’t a small one.  This snake turned out to be just over four feet long and weighted several pounds.  My .410 is a double barrel and I shot it twice with the snake shot.  That really pissed it off.

I walked back home and grabbed a couple of shells with four shot.  I figure that would do the trick.  That is if I shot it in the head a couple of times.

Two shots later, now four shots had been delivered, the snake’s head was pulp.  A group other neighbors had gathered to witness the execution.  Prior to the final shots there had been calls to wait while pictures were taken and requests not to shoot it in the body so the skin could be salvaged.

When the task was complete the crowd that had gathered stared at the massive snake. A great deal of advice regarding snake prevention was bantered about. A father lifted the dead timber back  with a stick allowing his boys to touch the undamaged skin. It turned out no one wanted to take the body home to remove that skin.  A hole was found to be used for the monsters headless body’s final resting place.

The crowd slowly dispersed everyone mumbling about the rattler.  What I took away from the event is that next time I’ll gather up a 12 gauge.