During the past 316 days I moved up from 32 pounds to 40 pounds.  I’ve upgraded my arrows three times moving from the $4.90 arrows to the $6.90 arrows.  I’ve worn through three tabs and have just ordered replacement leather for my current tab.

I’d like to upgrade my arrows but I am considering moving to 42-pound limbs.  I have upgraded my sight and aperture three times.  I’ve also kept every receipt for every item purchased in pursuit of improving archery.

I don’t shoot everyday, hence 226 days out of 316 days.  The missing 84 days were recovery days.  (About 25% of training is recovery using my schedule)

Today was a half-day and a short day, just 60 arrows in the morning.  There will be no archery practice in the afternoon and no practice tomorrow.

I find it harder to stop shooting than to practice.  But, I know recovery is important.

The Georgia Cup is an outdoor archery tournament. In the past, I’ve competed as a compound bow shooter.  This year I shot an Olympic recurve.  It was also my first event as a Master archer in recurve.  It was the weekend when Tropical Storm Claudette dropped in on the Peach State.

Since switching to Olympic recurve I’ve competed in the adult seniors group.  That is the age division for archers under 50 and those 50 or older who want to enter that division.  Initially, I’d enter as a senior and not a Master, those archers 50 or older.

The difference in the distance is that the seniors shoot 70 meters and Masters shoot 60 meters.  I changed divisions when a storm, not Claudette, intersected with the 10 extra meters I need to shoot 70 meters.  The unnamed storm rearranged the range limiting me to 60 meters.

The Georgia Cup was my first tournament shooting in the 50 and older category.  From a social perspective it was more fun.

There’s a lot of waiting in archery.  In prior events there really hasn’t been a whole lot to talk about with the younger archers.  Most of the competitors I’ve shot against since switching have been younger than my children.

I found with the less young folks there was ample conversation between ends, pulling arrows, and waiting during the exchange from the qualifying round and the elimination rounds.

Originally, the two rounds were being held over two days.  However, Tropical Storm Claudette required a contingency plan moved into action and both were shot on the same day. It made for a long day.

In those, I still ended up shooting against kids.  Cadets shoot at 60 meters, the next step up being seniors at 70 meters, and both groups, Cadets and Masters, had been bracketed together.

I had a bye before shooting my first elimination.  Before it was over the cadets were referring to me as Grandpa.  Each opponent was Korean so I took it as an endearment not a slight.  The fact their parents also referred to me as Grandpa made it seem okay.

Throughout the day Tropical Storm Claudette did its best to disrupt the play.  It was nasty.  There was wind and rain all day.  As might be expected it was cloudy and at times dark.

Despite the deeply overcast conditions I wore sunglasses.  Not to look cool.  The time clock with retina scorching LEDs was perfectly arranged 15 meters in front of my target.  Without the extremely nice polarizing lenses of those glasses I’d have not seen the target as well. Having a time clock frying your eyes and counting down during a wind and rainstorm are less than ideal conditions for shooting.

There really wasn’t any point in complaining.  It didn’t matter much, thanks to the sunglasses.  I ended up winning even though I didn’t score my average for the distance. 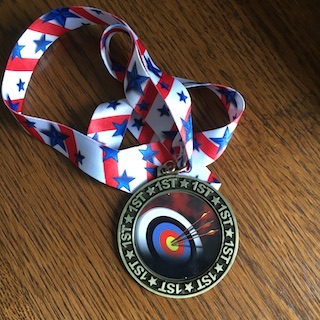 As it turned out, Sunday, the day weather forecasters had predicted the worse weather conditions was a miss.  Sunday turned out to be pretty nice with less wind and lighter rain.

Someone recently asked me how I shot my arrows.  I replied, “I yank ‘um back and let ‘um go.”

The person making the inquiry seemed a tab put off by the response.

A lot of folks love Facebook.  There was a time that I, too, enjoyed Facebook. Not any longer.

I signed up for Facebook while in Hawaii.  My wife and I were there for a race and vacation.  The race wasn’t a triathlon; it was only a run on the Big Island.  My wife had a Facebook account and was in touch with our children.  It looked like fun so I signed up for an account.

Over the years I collected a lot of social media friends and got in touch with hundreds of old friends I hadn’t seen in years.  A one point I had over 2600 ‘social media’ friends.  Then, Facebook turned dark.

By turning dark I mean it became a conduit for all manner of falsehoods, bashing, and outright hateful posts. Additionally, it felt like I was digging through crap just to find my actual friends.

This was frustrating so I dropped bout 2200 ‘social media’ friends hoping I see stuff from actual friends.  It didn’t pan out the way I’d hoped.

I’d drop off entirely if there were a better way to stay in touch with information specific to archery that comes from local groups.