The past three days on the Eastern Shore of Maryland were devoted to 3D. Two days of practice and a tournament. The tournament was held on Sunday, in Delaware, a short drive from Easton, MD. Practice was at the Schrader’s 3D range on Saturday and Monday.

Practicing at my home in North Carolina on paper isn’t the same as 3D.  3D target sizes vary and distances aren’t known. Schrader’s Outdoors is a quick drive from my home in Easton, MD and where I go to practice on foam.

Saturday’s practice was unusual; there were lots of other archers on the range. Typically, the 3D range is empty. With hunting season opening people had dusted off their bows, brought out their shiny new bows, filled quivers with newly fletched arrows and were out to take aim on foam. It was clear many of these would be bow hunters had not practiced in some time. 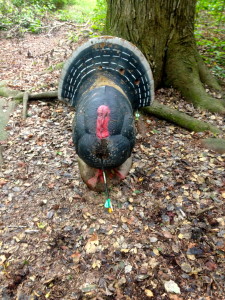 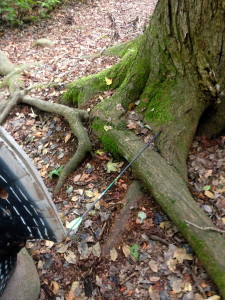 This turkey is fairly easy at 20 yards, a straight shot. Someone left an arrow in the tree behind it.

The range at Schrader’s is certainly large enough for safety, but privacy isn’t guaranteed. Walking past clusters of bowmen it was obvious their dreamed of prey would be safe from these seasonal archers testing their skill.

Two young men I noticed seemed more appropriately dressed for golf or tennis than practice on a muddy, tick and chigger infested 3D range. Those boys were going to be a feast for the little parasites infesting the bushes behind the targets. Both of them seemed to be spending a lot time searching for arrows in the underbrush.

Following Sunday’s tournament in Delaware I headed back to Schrader’s. I’d be in North Carolina on Tuesday and as yet have no 3D targets of my own. The closest range is over an hour’s drive away. In Maryland the drive to a 3D range is about 25 minutes.  Also,  Monday meant people would be working and I’d have the range to myself.

On the range I found broken arrows, arrows dropped on paths then overlooked, and arrows sticking in the trees behind targets. While the target placement at Schrader’s isn’t a pushover, the course has stakes placed so that most people can hit foam. Apparently, many peoples’ ego overrode their skill and they shot further out than their expertise could support.

When I was in my late teens I worked at hunting club, “Hall Brothers Hunting Club” near Savannah, GA. Frequently, guests would arrive with expensive equipment and no clue how to hunt or shoot. We ensured they left with a trophy if that was their goal even if someone else took the gun from their hands, shot the animal, handed the gun back and exclaimed to the client, “Nice shot!” Watching people on Saturday reminded me of those days. Seeing the remains of their arrows on Monday confirmed my suspicion. 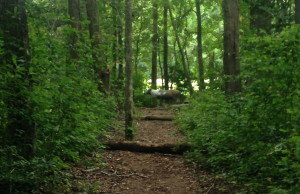 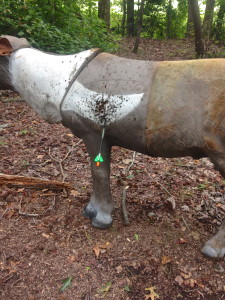 This elk sits at stake 29.  The next target is a boar 18 yards from the stake.

3D is very different from shooting at flat paper, clearly defined targets and known distances. I enjoy both types of shooting. Each has its own set of challenges. It was good to get back to Maryland to practice 3D and to compete in Delaware.