Rolling into 2019 there was a high degree of optimism.  By January’s end,  a month into the year, it was obvious something was amiss.

Despite plenty of hours of training and practice following a decent plan scores just didn’t increase as they might have in my imagination.  In 2018 as I set the 2019 plan in place archery was going well.  As the year matured the curve of improvement frankly didn’t rise as planned and hoped.

Last year, I was able to compete in 14 tournaments.  The reduction in competition primarily being less 3D than in previous years – a factor of diminution associated with travel to and from State level events.

Of the 14 events 4 were local 3D shoots that were completed as paid practice.  By paid practice I mean, events in which I wasn’t sufficiently ready to compete, shot in a younger age group, or might have been in way over my head.

That leaves 10 events on the National, Regional or State Championships.  Even though I won four of them it was my individual scores that, for me, were less than satisfying. 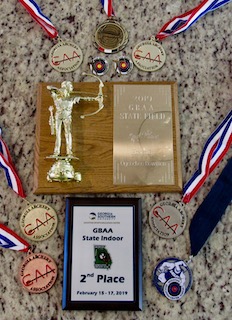 Those 14 events (the 4 local 3D excluded from the summary above) don’t include league style competitions.  The losses were all very close.  No loss was greater than 3 points and one was a second based on inner 10 counts.

The win to loss ratio wasn’t the disappointment.  The failure was in my overall scores.  At some point it seemed I’d simply misplaced my developing form and slid backwards.  I still hit some sloppy tens but the feel was off.  For 2020, in hopes of finding a better rate of improvement, I’ve built a training plan and schedule to reboot performance.

On the other hand this website continues to grow with monthly visits up by 20.8% or over 24,000 visitors per month.  If I only knew how to make money here that would be nice.