A version of this was sent to my sponsors:

This quarter has been a frustration – no wins. I competed in 8 events. Six in archery and two were bicycle races.

Yes, doing a bicycle race was a bit risky. A crash could wreck an archery season. Both bike races were time trials so odds of a crash were low. The cycling races yielded two-second place finishes.

Archery produced 3-second place finishes, including 2nd place at the Maryland IBO State Championship. There were also 2 third place finishes and one where I ended up out of the top 10.  (we all have those weekends.)

Two archery events I’d planned were canceled because of storms. The NFAA Sectionals messed me up for the Xterra Triathlon. I was competing in the sectional that ran long infringing on the triathlon – both were on the same day. The archery in the morning followed by the triathlon in the afternoon. An afternoon triathlon – an Xterra – would have been very cool. As it turned out I had to be satisfied with the 3rd place finish after the 2-day sectional competition in archery.

I’ve been on the road a lot having traveled 2490 miles this quarter to compete. I am looking forward to some time back home before heading out to the IBO World’s.

The website, Puttingitontheline.com, where I post remains strong. During Q2 it had 32,860 visitors in Q2 who read 84,567 pages. It also has a new logo. 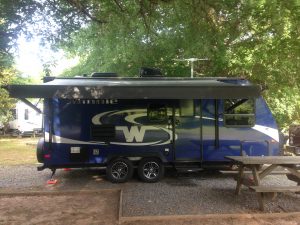 To reduce costs (based on a three year ROI) we bought a Winnebago. For example, the past 25 nights on the road cost $592.00 using the Winnebago (lodging only) whereas hotel and kennel fees would have been $4,520.00.

That’s pretty much it for Q2.