The Buckeyes 3D tournament didn’t pan out as I’d hoped. Nevertheless, I met some nice folks – as are most archers I’ve crossed paths with since I began this adventure. To help matters, the rain (it had been storming for days) stopped just before noon. Aside from the red clay muck on the practice range, the course was excellent. 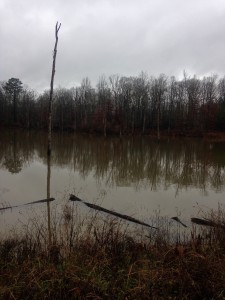 Entering the Buckeyes Plantation archers pass a pond, which I learned is filled with bass. The pond extends beyond the trees in the photo to a dam and beyond. Archers are often outdoorsmen and fishing is another sport enjoyed many among our alliance. It is a pretty awesome entrance to the course.

The Buckeyes tournament is an ASA event. I shoot ASA and IBO. Basically, I’ll shoot anybody’s tournament. This one, I entered in the “Open Money” group even though I’d be using a hunting set-up. An event official, David (an easy name to remember), teamed me up with Corey Bryant, a Factory Pro for Mathews.

The targets weren’t impossibly difficult and there were no giveaways on the course. One was my favorites was a boar in a ditch at the far side of a ridge. The open-money stake was down an opposite side of the embankment. This meant the archer was shooting just above ground level, over a mesa-like plateau, into a partially visual boar. It was a cool shot.

Corey and I were first onto the course and second off. A pair of traditional shooters played through. We were lucky to have gotten on the range when we did. As we exited the course it was plain to see a lot of folks had arrived as the rainy weather had departed. There was a moderate backup being created as shooters entered the course. Still more were warming up on the practice range.

Corey ended up winning the ‘Open-Money’ class. Even though I shot below my average I got a great sense for the longer distances during actual competition. Hopefully, I’ll get to return to the Buckeyes Plantation for another tournament this year.