Today, while running, my brain cleared – it didn’t take long, there wasn’t a lot of clutter floating around upstairs.  When my head opens thoughts and ideas pop into mental view.  On this run what popped in to my consciousness was Carlita’s foot apparel worn during Sunday’s 3D Tournament at Mid-Del Archery in Harrington, Delaware. (This isn’t weird in the way you might think)

The 3D tournament was an IBO Qualifier held at the Mid-Del Archers’ range.  It had been raining for weeks and the course was a mud hole.  Carlita is married to Wes and both are archers.  They were shooting during the tournament and grouped with a couple friends, John and Paul.  All four are excellent archers.

The tournament was a major event and as such the course was crowded.  There were assemblies of four or five archers weaving and crisscrossing the range to avoid the mire and standing water.  The soaked course could not be circumnavigated so some folks were shooting the front 15 targets then retracing their steps to the back 15 and vica-versa.  Sloshing about, I’d started on the back 15; I crossed paths with Carlita’s assembly on the front 15.  I hadn’t seen the four of them since we’d finished the Indoor League Competition at Cypress Creek.

They are a wholesome group of people.  All of them are friendly, helpful, encouraging and quick to laugh.  I was pleased to see them.  The guys were ready for the potential of a muddy day having worn rugged footwear.  (Among all the competitors I noticed an abundance of work boots and knee high rubber boots.)  I’d chosen incorrectly and worn running shoes.  Having stopped to say hello to the quartet, I happened to glance down and noticed Carlita’s feet.

Carlita was wearing white, slight, flat, girly-strapped sandals.  They and her feet we mud free.  My mental conclusion was that someone, perhaps Wes, had been giving her piggyback rides.  What I’d tactlessly blurted out was, “You are wearing those!” Rather than a comment from anyone in the crowd in agreement with the obvious sandal blunder, Paul immediately focused onto Carlita’s possible need to have her toenails painted. Paul had initiated a toenail painting controversy!

As argument and pontification on proper toenail artistry elevated it was suggested that: 1) She could have her toenails painted professionally, 2) she should paint them, or 3) Wes could paint them.  It was observed that since Wes was shooting so well, exemplifying steady hands, that he could certainly paint Carlita’s toenails.  The choices being debated, each with merits and detriment, heads bobbed from feet to speakers, the cluster of compadres centered on toes and painting. Meanwhile, their ignored arrows protruded from a headless coyote target 30 yards away. The conversation seemed mismatched to the mud, the guys, the bows, the targets, arrows and the swampy outdoors.  All I could do was listen and wonder. Paul smiled with satisfaction having ignited a fuse that threw vocal flame toward silent toes.

Eventually, the debate floundered so that arrows and scores could be collected and recorded.   We moved away in oppose directions allowing more stoic archers’ to approach the headless canine. While I slopped along in mud I glanced back to see if Carlita was indeed being carried or if she was somehow levitating above the muck.  She was on her own, skillfully ambulating the high ground.

The shoot in Delaware was fun and aside from the muddy course a nice day.  I will have to ask, when I next see Carlita, how did her feet and shoes fare over the back 15. Such are the thoughts that float through my head while I run. 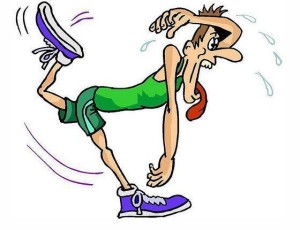