On Saturday January 10, the Fountain of Life’s Soul Hunters Archery Club held an indoor 3D tournament in Elizabeth City, NC. A large crowd of shooters and supporters turned out for the event that lasted from eight in the morning until noon. For those people spending hours at the competition food cooked on a grill was available and despite the outside cold temperature the indoor range was toasty warm.

The course consisted of twenty targets and five shooting stations. These station, they’d be stakes if they were outside, stood 12 to 34 yards from the targets. The yardage “sounds” fairly shootable, however, the masters of the course have worked to make the shots a real challenge. 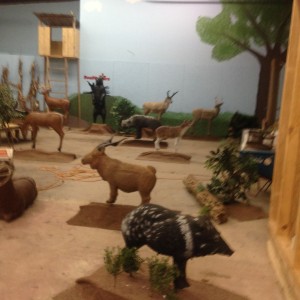 On the first four targets the set up was: first a deer laying down at about 12 yards, then a coyote at 18 yard, over the rear of the coyote was the really tough shot, a skunk at 22 yards, and the final deer at 32 yards. To increase the difficulty binoculars are not allowed.

The animals are placed in rows. Each of the rows contained at least one unusually difficult shot. The exception being the final row that held two very tough shots.

On the final the final row the second target was a large wolf. The next two animals, a coyote and a deer, where angled so that the wolf and a tree made hitting a center shot on the final two targets most difficult.

The weather, as happens every winter, was cold outside. The large propane powered heaters had the cavern within which we shot warm. Actually, by mid-morning, it was quite comfortable.

On this day the competitors from North Carolina and West Virginia ranged in age from around 6 years to 83 years old. It seemed  everyone knew one another despite the size of the crowd attending the tournament. There was a lot of joking and laughing throughout the day.

Awards were presented to the top three finishers. After the awards ceremony everyone was invited to stay and shoot another round for fun. A great way to spend the morning and ten dollars.