Recently, I competed at the “Soul Hunters” Indoor 3D tournament. The Soul Hunters, in Elizabeth City, NC is a sportsmen ministry. They also have an archery club that is a member of the Down East Archery Collation.

The Soul Hunters have frequent 3D competitions nearly year round. When the weather is warm they have an outdoor 3D course. During the coldest part of the year, they move their range inside.

One thing for certain, and perhaps it is part of their ministry; their ranges and targets are so tough you may find yourself praying for a good shot.

Outside their target set-up is always a challenge. Frequently they’ve set-up small targets in dark holes or on the opposite sides of ditches, mounds and ravines. It isn’t too often a matter of distance; it is a matter of judging the yardages under difficult terrain that makes their range hard. Their indoor range is the epitome of short-range complexity.

Outside using a scope is fine on the Soul Hunters range. Inside – the scope is nearly worthless. The longest shot is only 33 yards. The closest is around 12 yards. The animals are arranged in 5 columns with four shots per column. The difficulty comes in the arrangement of the targets – everything is tight. To add to the difficulty the lighting isn’t great making everything hard to see.

What happens is that you find yourself shooting through narrow lanes and small openings. Recently, they’ve added a “bonus” shot. Typically, a bonus shot is one where archers hope to make up points. Their bonus means archers mostly hope to hit the target. The bonus is a mosquito mounted on a tree, sitting between branches, 27 yards away and up about 6 feet.

I’ve had a horrible time in the past on their indoor range. Using my scope, and its black dot center on the lens, in some cases the shot has been almost pure guess. Basically, I’ve set the sight to 20 yards and moved the dot up and down leaving the elevation set at 20 yards. I’ve done OK like that but never winning. I’ve also shot really, really poorly using that technique.

This most recent tournament I decided to pull off my scope deferring fixed pins and a short stabilizer. It made all the difference. The targets are the same distance for all adult classes. Kids get to move up a few yards.

With the pins, I could see where I wanted my arrow to land. And this time I finally shot well. In their prior competitions I finished third twice and second twice. This time I took first place against some very good archers. 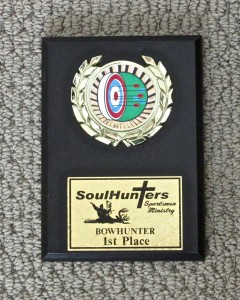 As always, the Soul Hunters drew a crowd of shooters. The warehouse that is used for the indoor range was packed. For sure, this group of heavenly people can certainly put together a devilish course. But, everyone seemed to have had a great time shooting – despite a lot of arrows smacking in the back wall, bouncing off the floor, or hitting the wrong target.