I often mention the number of archers that I compete against that appear, in my expert opinion, to be taking beta-blockers. They’re taking the drug, a PED in archery, to manage their hypertension.

I spent a solid decade studying hypertension and methods of treating it.  During that period I published research, sponsored the research of others, and helped develop methods to improve the health of people that have hypertension.

One of the best ways to combat the typical hypertension I see is through diet and exercise.  I worry about hypertension and the impact it could have on me.  Personally, a stroke would seriously limit my activity.

With that in mind, I exercise a lot.  The exercise aids in keeping my weight down – I do enjoy a good meal.  I admit I have exercised a lot all my life.

Picking up archery later (at 58 years old) than most archers being fit has not hurt me.  If I stopped shooting a bow tomorrow I’d still run and ride a bike.  In fact, I run almost everyday and ride a bike at least 4 times a week.

I used to ride more when I raced bicycles.  When I picked up duathlons and triathlons cycling became another element of the sport. Of all the sports I’ve done cycling is my favorite (no offense to archers).  Actually, football is my second favorite sport and had it not been for cycling I’d have played in college.

In my junior year of high school I’d been scouted by a few college teams.  My high school coach had all but guaranteed my parents I’d get a chance to play in college. To them that meant college tuition they’d not have worry about.

But, I got hooked on cycling and thought I’d give it a ride to see if I’d make an Olympic Team.  It is impossible to keep weight on while racing bicycles.  So, my football opportunities dropped as fast as the weight.

Cycling didn’t pan out either.  Just out of high school I did have a chance to race in Europe but passed and gradually migrated my attention to academics then a day job.  Through out it all I stayed on a bike. And I eventually raced in Europe.

Decades of fitness are paying off now that I’m in my mid-60s.  I take no prescription drugs.  My blood pressure runs around 117/68 and my percentage of body fat is in the single digits. 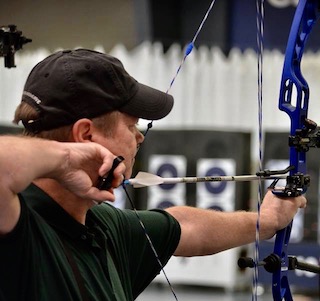 Where fitness pays other dividends is in archery.  Over a long two-day tournament I am far more bored than fatigued.

The hardest thing for me in archery is to remain in the game.  During a 4-hour 100-mile bicycle race or a 5-hour 70.3-mile ½ Ironman, I can stay focused.  (The young professionals are much faster than those times.) During a marathon or ½ marathon focus isn’t an issue.  During a long archery tournament my mind becomes numb.

That lack of focus might be assisted by a PED.  Certainly, those early end jitters would be reduced.  But, it is better to be fit and get through an event without the aid of a hypertension support medication. It is even better not to have high blood pressure.

Want to get fit? Check with your doc before you run around the block.