Our house in North Carolina is being completely renovated. This means the property is a construction site. We’d stay away from this house except for periodic reviews of the progress meaning a few one night stays. Our first one night stay turned out to be building site bivouac and occurred during our trip from Georgia to Maryland. We stopped in North Carolina so that I could compete at the Fountain of Life Sportsmen’s Indoor 3D tournament in Elizabeth City, NC.

In September I’d visited the “Soul Hunters” indoor range where they were constructing the facility to house a 3D course. The work was impressive. There I was introduced to Woody and Cliff by a mutual friend retired US Navy Chief Norman Mitchell. The work underway made it obvious this was going to be an exciting range on which to shoot.

Brenda and I left NC for GA to hunt and get out of the North Carolina work zone that was once our abode. After several weeks in Georgia we needed to head north, to Maryland, to check on our property in Easton. We’d been away about 6 weeks and it was time to visit and for a race. Rather than drive straight through, we stopped in Hertford in order to shoot in the 3D tournament.

The night tournament was held on Friday with a causal start from 5:00 PM until 8:00 PM. As archers arrived, they would be assigned groups of five. That group would then take shots at four foam animals in front of five stations for a total of 20 shots. Each archer had 2 minutes to compete four shots. My last tournament gave me the same 2 minutes, but at 3 targets of a known distance – 18 meters. This was going to be a bit more difficult. Arriving early I was placed into the first group along with my friend Norman Mitchell.

Before the first arrow was fired, Cliff gave an opening prayer.  Cliff,  delivered a sincere, friendly, and concise heavenly offering. Later, I congratulated him on a prayer well said.

After Cliff’s prayer the tournament was underway. Having never competed in an indoor 3D completion, I made one mistake – I broke out my binoculars. On this range, binoculars are not permitted and Woody quickly and politely let me know.

Shooting indoor 3D was a blast. The turnout seemed good, at least, based on my experience. There was plenty of good food that I resisted considering I’d need to hurry through the course and return home. Brenda was there and would be pleased if I got back sooner rather than later.

Because I rushed I wouldn’t be around for awards. I’d been shooting pretty good and thought I might have earned a place among the top archers. Norman let me know he’d heard my score that was much lower than I’d anticipated, so missing the awards wasn’t going to hurt.

I said my goodbyes and headed back to Hertford, NC. Shortly afterwards I heard from Norman. He’d asked for a recount of my totals. The new count improved my score by 30 points and moved me into second place. It was good news and Norman let me know that for the second time, he’d collected my trophy. Thank you, Norman! 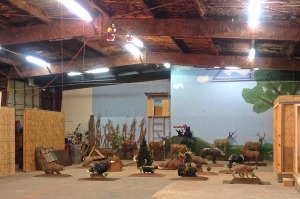 Brenda and I would be back on the road  on Saturday. I still had a race to complete in Preston, Maryland on Sunday. The stop in NC and the tournament in Elizabeth City was well worth the effort. The friends and fellowship among this group is pleasant and made for an excellent evening regardless of the competitive results.