This year, at least for the first eight months, my competitive events range the east coast from Florida to New York. Traveling I frequently visit wonderful places. Yesterday, I stopped in Carlton, GA. and Comer, GA adding two more scenic side trips to this tournament expedition.

Because I am primarily here to shoot, on non-competitive days I practice in the morning and afternoon. Wednesday is typically my longest practice and I’ll shoot for hours during the two sessions. Thursday I begin tapering for the weekend’s competition. After the morning practice on Thursday, Brenda, Ray, her father, and I took an excursion further into northeast Georgia.

In Carlton there is an antique shop, “Neat Pieces”  Brenda had wanted to visit. There we spent an hour or so digging and found a few treasures. She collected a several old bottles and I bought two vintage horse collars. The leather horse collars were gray with dirt and filth. Later, a few hours of cleaning and polishing would have them looking fairly decent.

Leaving Carlton, we loaded our treasures and drove to the covered bridge at Watson Mill in Comer. It has been raining a lot here, so the river was up. The covered bridge was built 130 years ago and later restored in 1973.   Standing near the river, I wished I had one of my kayaks with me. 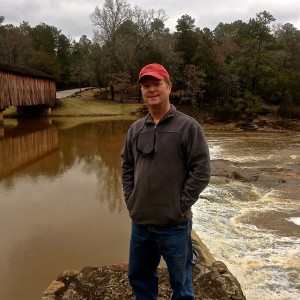 Traveling around the US and competing in sports is a great way to earn one’s living.  It gives me time to meet more people and make friends. It also allows me to find adventure and enjoy America.