When the Soul Hunters in the Elizabeth City formed an official archery club they were accepted into the Down East Archery Coalition. The newly formed club would be adding more competitions to the Coalition’s schedule. It meant there’d be more archery near my home. The Soul Hunters did not disappoint.

In their inaugural 3D tournament with the Coalition, the group put together some of the toughest shots imaginable. There were no freebees. It made for an interesting competition. To make it more challenging it rained. 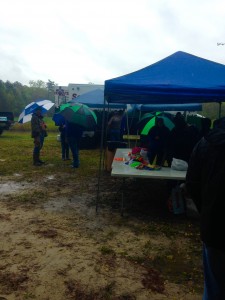 The weather report indicated there would be rain and it was correct. The archers that had monitored the weather came prepared with umbrellas and foul weather gear.

Despite the conditions the folks competing were having a blast. Even adults, at times, like to play in the rain.