Brenda has driven up to Maryland to visit her friends. Many of them are teachers and they are a long weekend. I remain in North Carolina with the dogs. There are just some trips where husbands aren’t necessary. This is a girls’ weekend.

Home alone it takes little effort to make a mess. Before Brenda returns I’ll have the place almost acceptable. In the meantime, I’ll do the usual, shoot, ride, and run.

Today began an archery double. That is, indoor 5-spot league on Saturday and 3D on Sunday.

The league competition was my final exercise in release decisions before the USA Archery Indoor Nationals. I shoot with a hinge or a thumb release. Last week, at the NC State Indoor Championship I used a thumb. During the following days I practiced with a hinge. There is little difference in the outcome.

My problem with this thumb release my be associated with it being a very inexpensive product. It has no way to adjust the trigger pressure. It is a one size fits all. It seems that a lighter touch might offer an overall improvement. Of course, that means purchasing a new release. Not something I’d do so close to the Nationals. At least, that’s my current thinking.

The problem with a hinge is not the device itself. For me, it’s eyesight and light. I have fine vision. It’s not a bother except under fluorescent lighting. It appears that my dot becomes a blur under fluorescent lights. When that happens my focus is on trying the see the dot not on relaxing and making the shot. With the thumb I feel I have a little more flexibility controlling the dot to get the best image possible. At least I’m not worried about it.

That proved to be case today during the 5-spot competition. Yesterday, with the hinge shooting a vertical 3-spot in my yard and with wind I ended up with a personal best. What occurred to me was how defined my dot was under natural light.

At the indoor range today my dot was a blur barely perceptible. After three ends I’d only shot three Xs. In addition, I shot three 4s. In frustration I soon switched to the thumb. Despite the thumb and hinge being slightly different where the sight is concerned I was able to fire off thirty-seven Xs after tweaking the sight a bit. That made my decision for the Nationals. 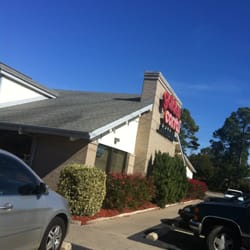 Back home, and having stopped for a buffet lunch at Golden Corral, I took a bike ride. It was such a nice day here that it would have been criminal to have not ridden. Then, I grabbed my back-up bow and got it sighted for 3D. Once that was done, I headed over to my 3D range for an additional three hours of practice.

Because I’ve been spending so many hours shooting paper at a known distance 3D practice wasn’t stellar. In fact, I lost one arrow when I relied on a rangefinder versus my estimate of the yardage – I was right, it was wrong.

What I’d been doing was starting at 20 yards and working my way out to 45 yards. The pin system I have on my backup bow only has pins to 45 yards. I could switch over to primary bow and use a sight and scope, but I don’t want to mess with anything on that bow before next weekend.

So, the 3D practice was pins shooting several arrows from 20 to 45 yards at 5-yard increments. The exercise took 3 hours on a rather fast pace to get through all the targets.

The miss (and subsequent lost arrow) was on a turkey hen positioned at a tough angle that is obstructed making the shot more difficult. My range finder read 27 yards, I estimated 22 yards. I went with the range finder skimming the arrow over the back to the target.

It was also the inaugural practice for my latest 3D target, another small one, a rabbit. The spot I’d originally picked for the rabbit was limited for space. Where it would have been positioned meant a maximum of 30 yards. I found a better area where I can get an easy 50 yards of distance. You know, somewhere there will be a time when a small target is sitting 50 yards away. Most likely a bobcat, turkey, badger or javelina.

It was a good day of shooting. The temperature was ideal. Thankfully, Brenda left me some pasta in a Tupperware container so I’ll have decent dinner.