November 1st  (2018) marked 5 years of shooting a bow for me. Sixty months isn’t such a long time. During these past sixty months USA archery changed the way we score a 3-spot. That is, we changed from scoring 10s and Xs to only the X ring equaling 10 points. The sport got tougher and it is taking longer to achieve a level of expertise than I’d initially guessed.

The little ten or inner ten or X ring, whatever you want call it this dime sized 10 point ring remains the same in size. But, the outer ten is now only worth nine points. At 18-meters (20 yards) a dime is a small target. The thing is I thought I’d been shooting with a bit more accuracy after 5 years.

When I began shooting arrows I thought it would be pretty much like switching from cycling to duathlon. That was pretty easy. All I needed to do was start running. I could already ride a bike and had won all sorts of prizes racing bicycles in the US and Europe.

Sure enough duathlon moving along pretty rapidly and I earned a spot on the USA Team to the World Duathlon Championship about a year after I picked up running. When I added swimming, part of the plan to become a triathlete, I learned swimming was not a strong discipline for me.

Still, I did well in shorter triathlons where I didn’t lose so much time during the swim. Eventually, I moved up in swimming from the slowest 25 percentile to the upper (faster) 25 percentile. I even brought my long distance, 2.4-mile swim (Ironman distance) down to around an hour. 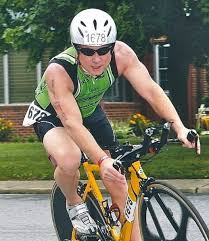 Transfer talent from cycling to triathlon wasn’t all that difficult particularly competing in my age group. Archery, however, is another matter. There are some elements of sport that do transfer such as determination and discipline. The mental focus is, in my opinion, different. Archery requires a mental effort unlike that of racing an Ironman.

Archery excellence or at least elite level performance based on scores and winning, is going to take time. Five years into this sport I’d hoped to be further along. It can be frustrating. Thankfully, I have data that shows progress, even though part of the progression included making the ten ring smaller.