I doubt I’ll go to the 2017 IBO World Championship in Seven Springs, Pennsylvania. Last year’s event was not a highlight of my archery career. In addition, unless you can average 10.4 points per arrow there’s not much point in spending the money to make the trip. Sure, you could argue, “It’s a good experience.” You’d be right. If you’re willing to fund the trip – I’m there.

Still, I’m in Staunton to shoot an IBO World Championship qualifier. Between now and the main IBO event, who knows, my 3D average might spike. 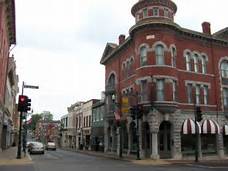 Staunton is not around the corner from New Hope, North Carolina. It’s about 260 miles from my house to the Augusta Archers’ Club, host of the qualifier. I’d considered making the trip and renting a hotel. Instead, this is being typed from my Winnebago at a KOA Campground.

The KOA was booked online. The site clicked for the reservation was really nice. Bordered by trees and backed up to a small ‘lake.’ It’s not really a lake; it’s a medium (at best) pond. But, the site looked good and it was booked.

Upon arrival the registration clerk pointed out the site’s location on the campground map. The campsite’s position had changed from the clicked on photo shown during the online selection. Now, it was a narrow, treeless mat of gravel backed up to a visitors’ parking lot and bordered by other camping rigs.

The debate to improve the parking situation with the registration agent failed, the clerk claiming all spots were rented. Furthermore, she added with emphasis, “The computer assigns sites and there is nothing that can be done about it.” As proof, she rotated a computer screen for me to view to verify exactly what the 0’s and 1’s had assigned. There’s no arguing with a speechless electronic binary brain. The monitor glowed in my face offering no compromise. Essentially, it was keep HAL’s bait and switch site or KOA retains my deposit and I move on.

(HAL is an AI from 2001 A Space Odyssey. The initials HAL each represent one letter from alphabet moved one space each from IBM. This is being typed on an Apple. If you never saw the movie or read the book this all is meaningless to you)

Deciding that any spot might be better than the Wal-Mart parking lot I backed into the small stony space. Once the truck was unhooked then power, water and sewage were connected I rolled out the RV’s canopy to help keep the sun off the camper. It had to be reeled back in. The site is so tight the canopy extended partly over the road. It was foreseeable that another RV could drive past and rip the canvas extension off the rig.

With nothing else to be done, I took a short practice drive over to the Augusta Archers range to ensure there’d be no confusion in the morning. The drive only took about 18 minutes, a bonus for the KOA.

The grounds, from what I could see on the drive in, were very nice. I’ll find out first hand on Sunday. The IBO qualifier here is held over two days. It was finished for Saturday when I arrived.

A number of competitors were hanging out in the Augusta Archers clubhouse, which holds a decent indoor range. The archers were all men except for one woman. The lady was pretty much the only person that appeared willing to talk aside from the most verbally economic answering of questions directed toward any of the men.

That is until we hit upon Seven Springs. Then, the masculine group all wanted to share and one-up each other on their woeful experiences at the Pennsylvania site. It seems my abysmal adventure of 2016 might not have been the worst in this group.

Hopefully, tomorrow I’ll get in zone and shoot over 300. Certainly, I’ll qualify – just in case.