None of us are as young as we once were and we’re getting older. Those of us that have been involved in sports deal with aging in whatever ways are best for ourselves. Some athletes turn to coaching. Others quit being competitive. Some take up a new perhaps less demanding sport as a pastime.

All sports that I am aware of have age groups wherein an athlete can compete against their peers. Archery provides the same arrangement. Archery does one thing I’ve not experienced in other sports. If an archer is in an age group that doesn’t have enough competitors, in archery, they’ll bump that athlete down to a younger and perhaps more competitive age group.

I don’t think this occurs at a major tournament. For example, if a 90 year old found that she was the only competitor at a USA Archery event I don’t think they’d bracket her into the 50-year-old division. She can voluntarily move down to a younger class.

However, at smaller tournaments, local events, archers in their 50’s might discover their group is light. That, too, has not been my experience, there seems to be an ample supply of archers shooting into their 50s. There does appear to be a thinning, not just of hairlines, of archers in the 60+ classes. (I’m in my 60’s if you didn’t know, for even care.)

The result of the limited number of archers over 60 means that I more often than not am competing either in the Senior or Master 50 age classes. In fact, I compete in my age class only 13% of the time.

Shooting against younger archers can’t become a problem for me. For some maturing athletes competing in classes they’ve already passed through is a problem. If it becomes a problem for you, you could end up with a defeatist attitude before letting your first arrow fly. Be assured, archery is one of the few sports where older competitors are pitted against younger ones. If you livelong enough it will happen to you –  find your way to deal with it. 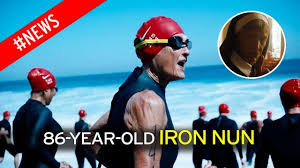 In triathlon, for example, I think it would be tough to place if I raced against a 45 year old triathlete. And just because an athlete “ages-up” that does not mean they get to race a shorter distance. An Ironman race is an Ironman, you can either do it or you can’t. Plus, there are cut off times for each discipline. That means you can’t be a great cyclist and awful swimmer and still make the cut. In archery, the tournaments sometimes decrease the distance Masters’ archers need to shoot to hit the target. Thus, they make it easier for the older folks to hit the target. That is not the case in triathlon or running. I mean, a 10K is a 10K no matter what your age.

For me, I still like competing at the senior level. For me, if I do another Ironman, I’ll be racing the same distance as the Pros and be subject to the same cut off times. Two weeks ago, when I raced a 5K, I ran the same course and distance as the University track star that won the event. (I won my age group and was not the only runner in the class)

If it bothered me compete against archers younger than me I’d have trouble every time I shot with other people. I am almost always the oldest archer in the crowd.

If you are lucky enough to have the problem of being forced into a class that you passed though, because you’ve out-lived your opponents, consider yourself fortunate. Shooting with younger people will help keep you sharp. And know this, at the major championships; there will be enough old people to go around.