It was really bad. Two years ago, in Hertford, North Carolina, in 10° F, with snow on the ground, shooting while standing in a shed I shot better by 2 points than I did in the 2020 Georgia 18-meter State Championship.  In 2016, when I first scored using the inner 10 ring as 10 and the remainder of the yellow as 9 points I shot one point better than this past weekend.  In fact, I was 28 points below my average this past weekend.

A buddy of mine, who is a Level 4 USA Archery Coach, suggested I wasn’t bringing the elbow on my release arm around.  He didn’t know for certain as he was competing and shooting his bow on the same line at the same time as I. He knows that sometimes I fail in that regard – I’ll occasionally not have everything lined up.  I’ll land a fat nine to the right of the X when I make that mistake.  Fat nines were not my problem.  Those eights, sevens and even a six, those were the problems.

I don’t need to reach back too far to recall a five I’d landed.  I did that a few days ago.  It was during a team competition where my teammate and I rallied to finish shooting for the win.  I shot two tens and a five.  It was awful and I tossed it up to pressure – even though I didn’t notice all that much pressure.  Truth is at that point I was unaware we were shooting for the win.

Over the next two days, Friday and Saturday, I shot a few eights and let it go figuring those eights are rare even if they and that five from earlier where clustered.  There did seem to be a feel that those wild shots were coming at me with a bit more frequency.

On Sunday, the Georgia State Indoor 18-meter championship my arrows were everywhere. There were absolutely no groups on any target to suggest tweaking my sight.   I’d have a few decent arrows, those that landed pretty much where I’d expected they’d land, then arrows would be sailing out like discount birdshot.

Throughout it all I kept thinking that my shooting would recover and I’d land some tens.  That never really happened.  The final score was the lowest I’ve ever shot aiming at a vertical 3 spot scoring inner tens during competition or practice.

My friend who coaches top archers added to his earlier suggestion, “I think you just wanted this too much and were holding your shots too long.”  Maybe.

I am still working though what happened that lead me to such a poor performance.  Regardless of the potential finding I admit that this past weekend sucked when it comes to archery. For any of you that might ask, “But, you had fun – right?” For the record – No, it was not fun. 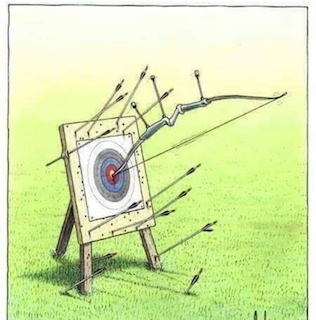 (I did enjoy seeing lots of good people.  That, on the other hand, was fun.)