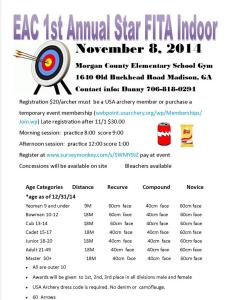 During my last hunting trip to Georgia, a few weeks ago, I discovered the event while searching for a shoot on the Internet. We would be returning to Georgia for more hunting and to attend Grandparent’s Day at my grandson’s school in Athens. I signed up for the event.

On the day of the tournament I arrived early so I could watch the morning shooters, sign in before the crowd and get some lunch. There was a 9:00 AM and 1:00 PM start time for shooters.

The two sessions had archers shooting at 60 cm or 40 cm faced targets. There were up to four targets per backstop. These backstops are large. I hoped I’d be assigned one of the lower targets. I got an upper target.

The foursome I shot with was from Georgia, North Carolina, and Alabama. Mike, from Alabama is tall. He must have been 6 feet 8 inches. He got an upper target and was pleased with the arrangement. I am a foot shorter than Mike, I was not so pleased.

My displeasure wasn’t the placement of the target; the problem was I could just reach the top arrow. Even on tiptoes I could barely grab the arrow. All of them were high and they were a struggle to remove. Following each end there was an awkward moment or two where I couldn’t pull the arrows with any finesse. Mike helped a lot which eased my suffering and kept us moving along.

Aside from those end following struggles the tournament ran well and ran fast. The judges focused on delivering shoot specific rules and information and didn’t use their positions to make small talk or try to entertain. Sixty arrows with a full house isn’t a sprint and needless monologues can make a long day. Everyone appreciated the judges’ professionalism.

I ended up shooting 21 points lower than my average scores since March. Still, I walked away with a 3rd place in the Masters division. But, the main highlight was that my cousin, Neil, drove over from Conyers, GA to watch.

The last time we’d seen each other we were in our teens. During the tournament I noticed him in the bleachers. I kept looking at him thinking, “Who is that guy?” At the break he walked over and asked, “How are you shooting?” I told him, “Well, I’m not hitting the lights or bouncing arrows off the floor, so pretty good.” He then asked, “Do you know who you’re talking to?” I guessed his brother, Payson.

After the tournament we had dinner together. There was not nearly enough time to catch up – 45 years covers a lot of ground. Neil’s a bit underweight at the moment (50 pounds). He’s had a tough time with a serious surgery but is on the mend. It was an unexpected treat and I really appreciated his effort. What a great day.