There seemed to be no point in playing top dollar to try something of which I had very little exposure.  Heck, my arrows cost $4.42 each.

Sadly, my low-end riser reached its limit – 26,011 arrows.  It was at that point the little red Galaxy Tourch gave up. 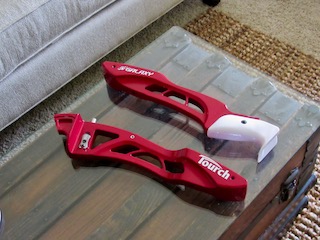 The inexpensive bow did a good job for 200 days of shooting.  Then, it broke in two on arrow number 26,011.  It had given all it had. Even the last arrow, launched from an exploding riser,  hit the target.

I really enjoyed that little bow and am sad to see if go. 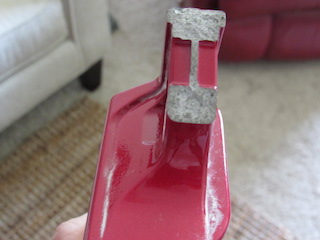 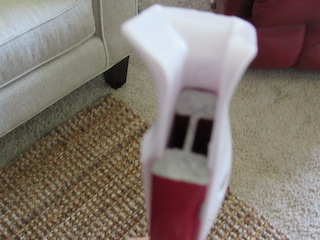 When I got to this computer the next morning I had a message waiting from Lancaster Archery’s Supply’s (LAS) Southern sales representative.  He wanted me to call him when I got a chance. Okay.

When the riser broke I was shooting with George Ryals, IV.  He’s the USA Archery Head Coach for the Paralympics Archery Team.  He took a picture of the broken riser.  Apparently, some of the folks at Lancaster Archery follow Coach Ryals on social media and they saw the picture online.

Before I called the LAS sales representative, it was too early in the morning,  I checked my email.  There was an email from LAS informing me that a new riser had been shipped to me.  It was less than 18 hours since the ole riser had failed.

Once the morning had worn on a bit I called the LAS sales representative, Tony.  I know Tony from archery here in Georgia. He wanted me to know that the riser, which had busted was out of stock and that LAS had shipped me an upgrade.  They also included a t-shirt, pouch and hat in the shipment.

Admittedly, I was surprised.  That really is unparalleled customer service.