Today the weather was perfect. Clear skies, a little breeze, and the temperature reached 78°F. It made for a nice day to practice some long shots and ride my mountain bike.

Shooting was a bit tricky since the early sunlight through the trees illuminated the target and left me in the shadows. It, of course, washed out my pins. Still, I shot for about an hour and a half until the call to ride my bike become overwhelming.

Competitive riding has been part of my life for 45 years. Those were spent racing in cycling, duathlon, and triathlon competition. Because I’d started racing bicycles before adding duathlon and triathlon, during the multi-sport events cycling was my strongest component.

Cycling, when it was my primary sport, meant road racing and track racing. I also raced mountain bikes for about 5 years and it was always a blast. Where we live in Maryland and on the North Carolina coast there isn’t any mountain biking. Here in Georgia I can hit trails and ride all day never touching pavement.

I’d planned a long off road ride and had a challenging course planned. I’d leave the house; cut along wooded trails, then hit a power line break riding that out and back for an hour each way.

It took 30 minutes to get through the woods and onto the power line break. These are nice to ride. There are often trails perpendicular to the power lines made by ATVs and logging for exploration. It’s hilly and rough. It’s fun. 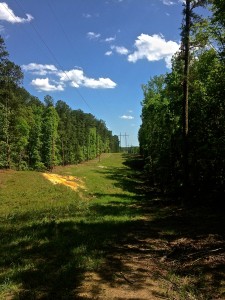 Fifteen minutes into the power line portion of the ride I reached a steep downhill that merged into a sharp turn before working into a steep climb. It was broken up with rain washouts and ruts. I stopped to look it over before taking the plunge.

This is what it would take: Stay to the left on the down hill, let momentum carry me over a small hump on the uphill then slam it hard to the right to pull off the climb without stopping or falling.

I rode back about twenty yards to get the speed it would take to make the assault after the downhill. I cranked up speed and lifted off my saddle to handle the ruts, hit the outcropped hump on the rise, then jerked right when my right foot pulled free.

It was a surprise to have my right leg off the pedal. The torque on the pedal was in the wrong direction to have pulled my cleat free. This made me lose momentum, I put my foot down saving a crash and was honestly amazed that I’d pulled off the pedal.

When I looked down I was even more astonished to find the cause of the liberated foot. The jam to the right was going to require a bit of force to move the entire bike making it hop toward the new direction I’d wanted. What had happened, and this has never happened to me before, I pulled the shoe apart! The shoe literally separated into two parts, the upper and the lower. The lower half holding the cleat remained firm with the pedal. The upper half followed my foot. And, these were not inexpensive shoes. They’d only been used about a dozen times. All I could do was offer a disappointed glare. 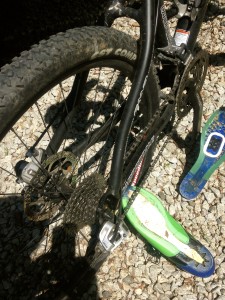 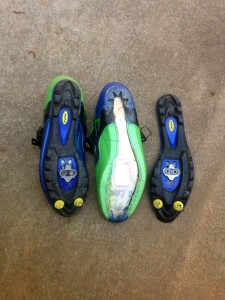 The ride was over except for the getting home leg. For that portion of the ride I found a road and gently pedaled back. Once home I tried using super glue to make the shoe whole. True to my experience with super glue, the only things that it seals together are fingers.

Regretfully, I only have one pair of mountain bike shoes with me in Georgia. I also only have one bow. In consideration of Sunday’s tournament, I hope it doesn’t fail me, too.