One of the most difficult 3D practice exercises was on the agenda today. It seems easy enough but it’s pretty tough.

First, I made a list of my animal targets pretty much as they are arranged on the course. Then, I generated 30 random numbers between 20 and 40 yards. Next, going down the list of numbers I attached them in series to the animals on my list. That means that a small target, like a mosquito, might be assigned a distance, from the random numbers, of 40 yards.

Now, that I had a list of targets and a distance assigned to the target I grabbed my bow and headed out to the range. The bow is an Elite 35 with pins and a short stabilizer. The arrows are Black Eagle Challengers. In addition to the equipment, I carried my wrist Garmin Forerunner to record how far I walked and how long it took to shoot 30 targets. 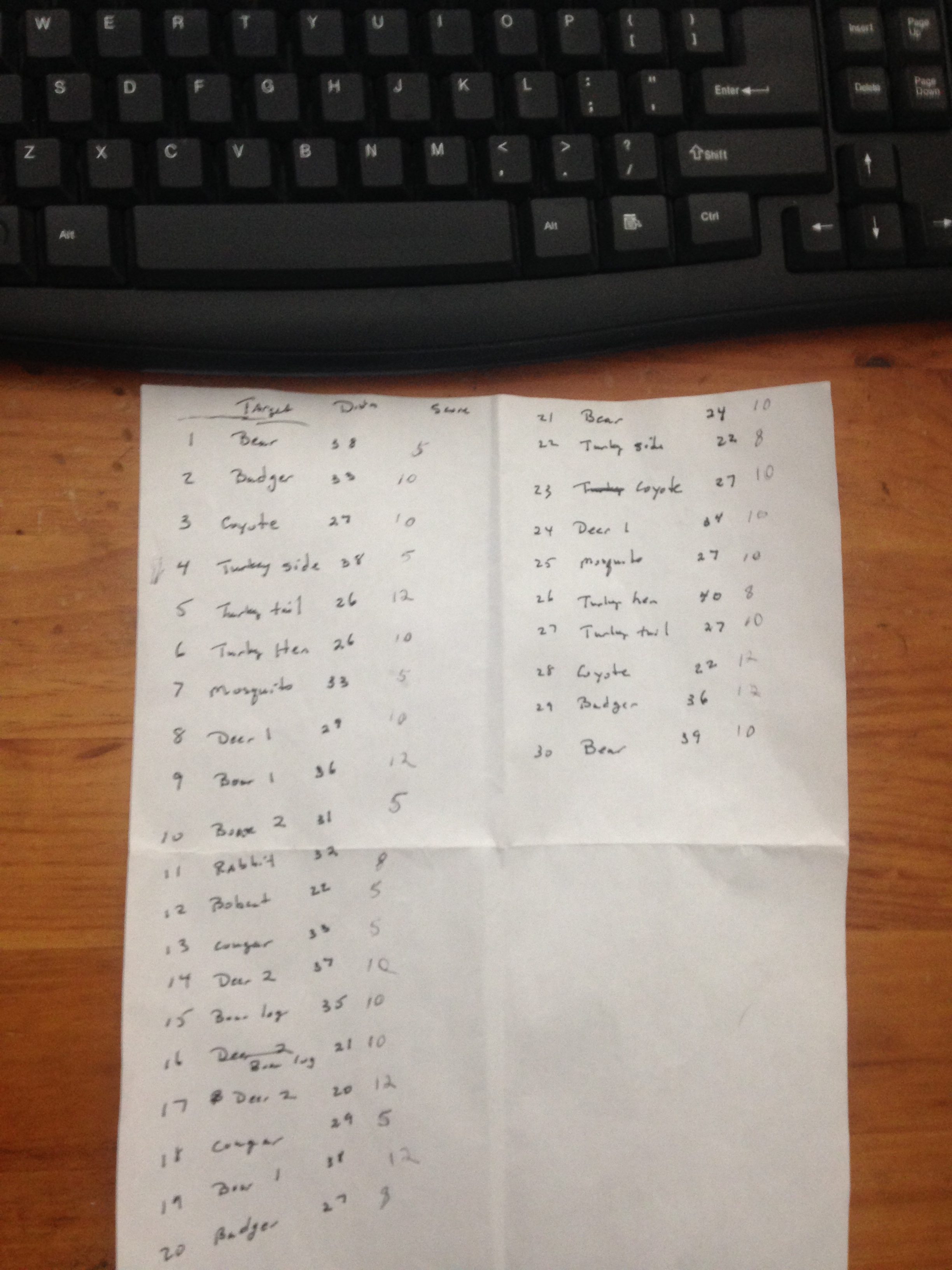 You may have notice, there was no warm-up. Getting a warm-up at a 3D competition isn’t always possible. When it is, and I need about 18 shots to have the distances fresh in my head. Naturally, there is often a lengthy delay before scoring begins by which time I’m cold and totally forgotten my warm up. This isn’t such a problem at local events, but the major tournaments continuously seem to present a warm-up a challenge. Taking that into consideration, I didn’t warm-up.

Also, I wanted to be on the range by 0830. At two major 3D events last year I had early start times. Typically, at the local shoots the first archers are off at 1000.

Yesterday, I had a lucky day at the gym. The weight room was nearly empty. Since I had the weights and machines to myself I indulged. That along with a hard run left me with some delayed onset muscle soreness. I felt it once I started shooting. Actually after ten targets I considered stopping. I didn’t, there may be days where I am not at my physical peak and still have to shoot.

Here’s the deal with knowing the distance and approaching a target. It seems slightly harder than standing at a stake the making the yardage assessment. (No range finder allowed in this drill) But, I think it is a great way to learn yardage. Of course, shooting a rabbit at 40 yards and getting a good score is tough whether you use a range finder or not.

The practice turned out to be difficult. My average score per arrow was 9. That’s 1.05 points lower than last week’s 3D tournament. It took an hour and twenty-two minutes to shoot the 30 targets that covered a distance of 1.35 miles. It was a demanding practice, but a good one.