One of the issues with archery is perfecting form.  Good form reliably produces a good shot. The thing is archers as a group are inconsistent with form.1 However, better archers are more consistent in their form.1

Practicing form is not simple a matter of hitting the center of the target at a known distance.  At times, poor form can result in a center shot. That isn’t a good approach that is having poor form and hoping for the best.

Designing a practice that is specifically tailored to form seems a simple matter – it isn’t. Having a coach watch the archer in practice and providing coaching tips can help.  The problem is that coaches often teach methods which are not incorporated by elite archers. 2 Apparently, coaches may be reciting what they’ve been taught to coach and that advice goes into one of the athlete’s ears and out the other. I’m not suggesting the athletes are wrong. On the contrary, I’m saying those coaching methods are wrong.

In order to create a method that might help create a specific training process for form the archer should be at a degree of accomplishment where the athlete is working on skills of improvement.

The practice isn’t a measure of points.  It is a measure of form, which is the area specific to the skill improvement.

The archer selects a distance that is outside a comfort zone.  For example, if 18-meters is the comfort zone move outside, for instance to 25-meters.  If the goal is better from for 50-meters move to 60 meters.  The idea is to reproduce groups.

If at 50-meters the archer is shooting scores that reveal few poor shots, like an rare eight, then at 60-meters the goal is to create a group of arrows where 100% are within the group.  The score does not matter.  The cluster of arrows is the primary goal.

Say that the archer shoots an end of 10 arrows at 50-meters.  The objective is to create a cluster of arrows, a group, with 100% of them in the yellow.  Should an arrow fall outside the yellow the percentage of success is decreased by 10%. If the main body of the arrows lands in the 10 right with two landing in the nine right that is either a 100% or 80% depending on the skill of the archer.

Whether the arrows fail within the group or outside the group each arrow is evaluated.  If an arrows lands high, a 12 O’clock nine, determine if the error was caused by the bow rocking so that the upper limb drifted back or the release hand pulled downward during the activation process. If an arrow lands smack in the middle of the X, pause to consider what occurred to create a good shot.

After each end record the percentage of arrows that are outside the group.  Keep a record of this as a tool to aid in the improvement of form. 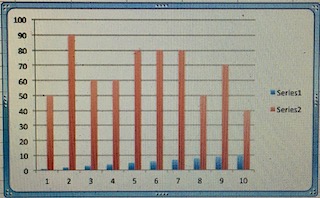 The above graph represents this sort of practice.  The red column is the percentage of good form score. In this case, 10 arrows at 60-meters, outside the yellow meant a decrease of 10% per arrow in most cases.