River and I got out a little later than usual to run. It was already hot. It felt good to me, less good to River. Because it was hot I directed the run toward an area where River could go swimming if she wanted. She wanted to swim.

It was a good day for a brick (a brick is a back to back run / ride for those of you that aren’t triathletes) and that was on my schedule. Back home I changed over to cycling and headed away on a bike. This day I took a mountain bike.

There are paths that lead into swamps about five miles from my home. The swamp is where I wanted to ride. 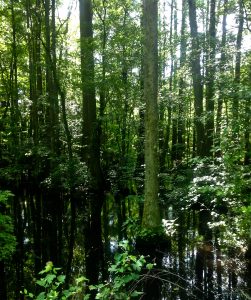 Shortly after I left the road and hit the trail I scared up a turkey. The hen had been hiding in some brush. Along with her were six babies. I took a couple of pictures then left them alone. 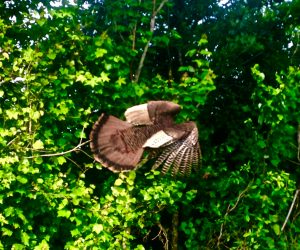 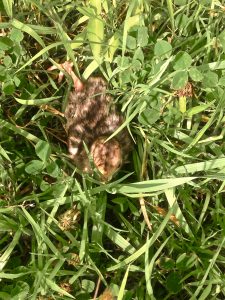 In the swampy area I noticed an unusual track – that of a human.   What on earth anyone would be doing way back on this trail barefoot is beyond me. 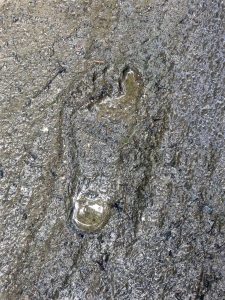 When I got home Brenda wanted to go out on the boat. She has two friends visiting. They’re all three Yoga girls. One of our daughters, Candace, has been a yoga instructor for years. Brenda and her friends are yoga instructors.

I know a lot of people enjoy yoga. I understand it is good for you. Brenda even talked me into trying it – twice. It didn’t stick. Anyway, Brenda wanted to take her friends out for a ride in the boat.

I’d just finished about 3 hours of cardio – running and riding. She found me asleep on the floor in one of my sheds. I suppose I’ll need to find a better hideout. But, Brenda got me up and moving so we could get out on the boat.

As I was gathering what I needed to take on the boat Brenda found me and asked me to get my shotgun to shoot a snake. She said, “There’s a moccasin eating a fish on the steps leading into the water.”

Sure enough, there was a massive water moccasin slowly mouthing a fish into its gut. The snake never stood a chance.

After that excitement we did get on the water for an hour or so. We headed back sooner than expected because the ladies were getting hungry. 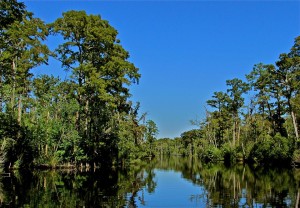 The remainder of the afternoon was devoted to archery. It was nearly 90 degrees when I started shooting. After an hour and a half I took a break to write this post. Once this is done, I’ll be heading back out to shoot some more.