You may be an archer and as such don’t necessarily find value in running.  If this is your position on running you are probably in the majority of archers.  To my knowledge there’s no official poll that provides information related to archers that use running as part of their training.  From purely informal observation of archers it seems many have allergies to running.

I’m a runner.  I run nearly every day.  Part of my running includes a day off per week – a part of a more formal program associated with archery.  Even before I ever picked up a bow I ran.

As children we run for the pleasure of running.  Today, I run with my grand children.  Racing Granddaddy is great sport.  Believe me these races are serious wind sprints.  One of them is an amazing runner. Her speed is shocking.  At 7 years old she asked to be timed and she was timed.  That’s how we discovered she really is fast.

Getting older many of us ran as part of some sport we played.  Others of us ran because we raced as runners or multi-sport athletes.  Archers on the other hand don’t run.

It wasn’t also so. Bows and arrows were originally tools for hunting and warfare.  Hunters often had to run to catch prey or get away from angry arrow poked prey.  In combat archers would empty their quivers on a field.  Once that happened pissed off cavalry would begin to chase the arrowless archers.  Those archers could run or at least those who fought in future battles were good runners. Archers on horseback, such as the Mongols, had an advantage in that they carried swords to apply to their trade once the arrows were gone.

Runner’s World, a magazine, comes to me without charge.  You may get hunting magazines for free – I get those as well.  That isn’t because you and I are great hunters.  No we get these free magazines thanks to the vendors that offset magazine’s cost with advertising. The vendors are hoping you’ll read their ads and buy their stuff.

I read Runner’s World, RW, and occasionally an article in one of the hunting rags.  RW often has ‘experts’ write for them whose work cracks me up.  This current issue did have a 5K training plan that I thought was excellent if you wanted to run 5K in less that 30 minutes.  That isn’t fast.  But, it is a good point for runners new to the sport that are seeking fitness and speed.  What cracked me up about this issue was the cover. 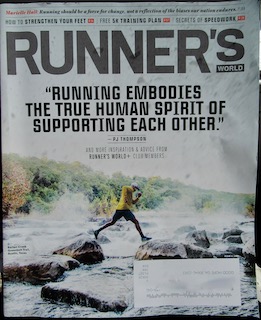 On the cover they’ve pictured a runner.  He’s running over rocks situated in the Barton Creek on the Greenbelt Trail in Austin, Texas.  When I pulled this RW from the mailbox and looked at the cover I laughed out loud.  The runner, PJ, photographed by Faith (her first name) is in mid flight gliding from wet boulder to wet boulder.

Immediately, I though “PJ you should be wearing a helmet.”  There is no way to consistently perform this acrobatic feat without falling.  If you slip on wet boulders, and you will, it is going to hurt.

I supposed Faith wanted a cool picture and talked PJ into taking the leap.  I hope PJ didn’t get hurt.

Athletes do run or should run.  If you do consider running trails are fun.  Running will make you more fit which can be an advantage in archery.  Trail running and trying to run across wet rocks in a creek isn’t smart. You will slip and fall. (Nope it has never happened to me.  I can fall on trails without the addition of wet boulders sitting in a creek to navigate.)