As most often the case my day began with a run. It was followed by archery practice, lunch, a boat ride, more archery and finally grilling fish for dinner. When the weather is as nice as it was yesterday, it is nearly impossible to stay indoors.

In the morning, running with my dog River we have two agendas. I run for fitness as much for pleasure. For River running is all pleasure and is followed by a swim. Before she hit the water she was already soaked having run through every creek, puddle and ditch we passed.

My morning archery practice was devoted to a 5-spot at 20 yards. In that morning session I worked on form and mental relaxation. As the day warmed, I put down the bow and readied my boat for time on the water.

There was little wind so the river was very flat. Flat water is great in a Carolina Skiff. Rather than head out to the Albemarle Sound we, Brenda my wife and I,  took a cruise of the more swampy parts of Little River. The clear sky and bright sun gave us an inspirational view of nature in in North Carolina.

The boat ride over I began my afternoon archery session, this time working at longer distances and odd angles. I didn’t shoot any further than 50 yards. Because my bow is slow (thanks in part to a short draw) it is as much fun waiting to hear the arrow strike the target, as it is shooting from further away. Because we live in such seclusion the main sound we hear are those of birds and animals. It isn’t difficult to hear the pop of an arrow at even 60 yards. 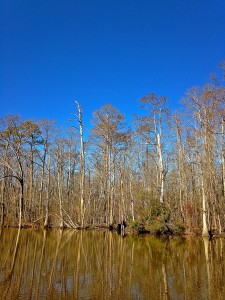 It was dark by the time we began dinner. Today it was grilled perch and striper, cheese grits and green beans. The fish was cooked slowly over lump coal and wood – pretty incredible. 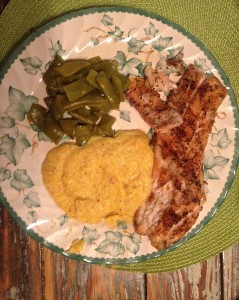 Living in the country is the best.