I suppose I don’t recover from working out like I did when I was in my 20s. Well, I know I don’t. Lately, I’ve been on a tear of riding, swimming, lifting weights, running and shooting. On top of that I’ve been hauling lumber and moving loads of dirt. It seems to have caught up with me and I felt it this afternoon while shooting.

I try to take rest days. Most of the time I succeed. This morning I didn’t even run that far. Not so much because I felt tired, Coco, the lab down the road, joined up with River, my lab, and I on the run. With all the rain we’ve been having I knew the two labs would get filthy. That meant I’d need to give River bath. I’d just bathed her yesterday (mud related incident) and was not up for doing it again. So, I turned around before we reached cresting creeks and over flowing ditches – one that is the last resting place of a buzzard picked deer.

Shooting in the afternoon I was on a muddy wet 3D range. I had no gittyup. Still I shot, and ended up 2 down (198 out of 200). It wasn’t so much a matter of not being able to judge yardage. At each target I recorded my distance, shot, then recorded the distance using a range finder. The average distance per my estimate was 32.3; the range finder’s average was 33 yards. The minimum distance, a mosquito was 18 yards and the maximum distance was 57 yards, a mountain lion. On both of those targets, the distance was one of convenience; water left me very few options regarding where to stand. I shot poorly, hopefully, just because I was tired.

To complicate shooting the sun, which can come through the trees because the leaves are down, created a glare on the lens of my scope. I was happy I didn’t lose any arrows. At least two shots were as much of a guess made aiming as I like to make. Amazingly, both of those shots were 12s. 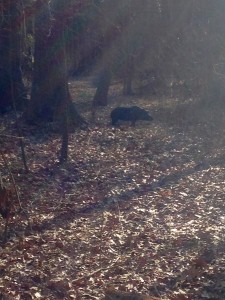 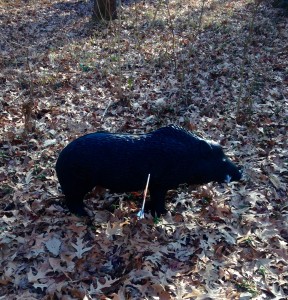 I did run this morning, I shot twice, and I will force an easy bike ride in an hour. But, tonight, I plan to have a good nights rest.