When it comes to tires on my vehicles, well I am fanatical about monitoring the thread, wear, and tire pressure. Many folks aren’t so careful and that’s a shame. The tires are where your vehicle meets the road and shouldn’t be taken for granted.

In archery, I feel similarly when it comes to my bowstring. I check my bowstring every morning before I shoot. Bowstrings should last between 3000 and 5000 shots (about a year for most people). I don’t keep a record of how many arrows I shoot in a day, but it is a lot. When I practice I have specific goals in mind, which are not always associated with the number of arrows I’ll fire. But, I know the approximate number of times I’ve shot and sometimes the exact number.

Because I do shoot so much, I am extra careful with my bowstring. This is where the arrow meets the bow. As a string wears it can get thin is spots and stretch. Because this happens over thousands of shots, it’s hard to notice. Another telltale indication a string may need to be replaced is peep rotation. When I notice my peep is beginning to twist I consider a new bowstring.

Over the past 28 months I gone through 8 bowstrings, excluding those that were on bows I owned for only a few months before selling. Including the first compound bow I bought and kept for about 4 months before I replaced the bow, that is 9 different bowstrings over 28 months. And finally, adding in the Bear Authority I owned for a few months, I’ll say I’ve had useful life out of 9.5 bowstrings.

Finding a good bowstring isn’t hard; there are plenty of good strings from which to choose. Finding a really good one is another matter. The strings that came on my bows when I bought them seemed to stretch the soonest. One purchased locally in Maryland was a middle of the ground product.

The strings that appear to hold up best are those from 60X. Granted, they are going to wear out and need to be replaced but one major difference I’ve noted is that as the string thins, I don’t get peep rotation. That impressed me, so I went to the 60X website and dug around. 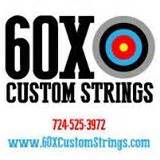 This is what I found on their blog, “60X Custom Strings warrants each 452X, 8190 and X set against peep rotation, serving separation, creep, manufacturing defects in materials, craftsmanship and design for a period of one (1) year from the delivery date.”

Granted, I change strings faster than once  a year, then again, I shoot nearly 20,000 arrows per year. Even at that pace, I have not observed any peep rotation with 60X strings.

When it comes to bowstrings, they are where the arrows meet the bow. I give them plenty of performance evaluation and expect them to hold up to a lot of work. Like the tires on my vehicles, the bowstring provides a measure of safety and performance.