It was another chilly morning here on the eastern shore of North Carolina. Hitting the road to run it was 15°F (-9°C). Today the weather was better than yesterday, not so much because of a warming trend, but the wind wasn’t nearly as bad.

The forecast is for a bit of snow beginning after lunch. We’re anticipating 1-3 inches. Properly dressed, cold can be dealt with and a lack of winter wind meant I’d shoot before the snowfall.

Dressed in my running attire I didn’t bother 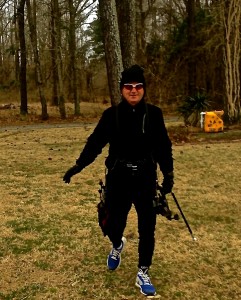 changing, really there wasn’t any point is changing clothes. The running gear had served me well for several miles and perhaps it would remain loyal against the cold.

Despite the heat hugging efforts of the winter run apparel I headed inside after only a couple of hours. The time outside included the hour spent running and hour shooting. The slower pace of archery helped me cool down from the run, which really wasn’t help. Once I’d cooled down cold soon followed and I was inside enjoying heat as only fossil fuel can produce.