On June 2, 2015 my friend John Chandler published the following post on his Facebook page. I repeatedly read it along with the subsequent comments. John and I spoke on this matter and he gave me permission to publish his post on this website. Along with his remarks I included those from Levi Morgan, with permission, and mine.

John Chandler: “First I would like to say Georgia Archers did well in KY this past weekend. We had lots of archers make the top of the list in lots of classes. Congrats to each and every one of you. But I have been scanning social media. I’m not seeing the normal “Great Weekend”, “So much fun,” “Can’t wait for the next one” comments. You know what I have seen? Known 50, Pro 50, Bumper Pro, The Meeting. SMH.

With 1841 scores posted for the ASA in KY (I counted); what is all the fuss about K50 needing to become a Pro class about? We should be happy with the growth in the sport, the women classes are growing fast, youth classes are bigger then ever, that is a good thing. The known classes (K50) have a place that is a fact (just look that the numbers).

Why does K50 need Pro in the name? That is the question that needs to be answered. Why would making it a PRO class make it better? Contingency money? Will it bring more top archers to the class? Are so you can say you shoot in a pro class?

As for contingency money many of the top companies have already said they will have it next year in that class as it is now. I know some of the biggest names in the archery world have shot this class before: Jesse Broadwater Dave Cousins, Scott Starnes & more. These are Pros in the sport and have shot in the class that didn’t have PRO in the name.

Now for the last question – to say you shoot in the pro class? Well ASA has a pro class that you can do just that. Pay your money and shoot it is that easy. Tim, Dan McCarthy, Levi Morgan & more would not mind at all for you to join them. Oh but you are not good at yardage? Well then work on it. Top athletes in every sport work hard to become what they want to be. They don’t try to change the game to fit what they are not good at.

As some have said Return On Investment (ROI) is the way of business. How would adding a Pro 50 Benefit ASA? Fees for the class would go up for sure if it became a Pro class. Would the class grow? I think the numbers would drop because. Some would not pay the Pro fees.

I think the only way archery will get more money whether it’s 3D, USA Archery, NFAA will be to find outside sponsors. Every other sport that is big has this: NASCAR with Nextel, Golf with FedEx Cup, and Football with advertising. Corporate sponsorships will help more then anything else. The archery equipment companies have done a great job but there is only so much $$ to be spent.

Solutions to problems are what we need, if they’re really problems. That being said what does everyone else think? If you think is should change or not? But is so why and how should it be done?” 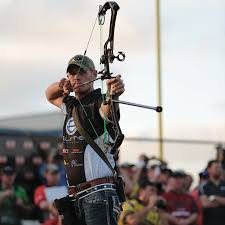 ‪Levi Morgan: ‪ “I promise you that if the top pros move over – 60 plus up will win every time. If you can’t shoot 60 up on a known course you won’t stand a chance. When we have the simms known we were hitting 9 out of 10 14s almost every tournament. If you give me the yardage or Danny or Tim or any of us for that matter and we miss more than five 12s out of 20 shots something is wrong. If the known 50 guys want to test their shooting skills against the best in the world then tell them to come to Redding, Vegas, or Louisville and do it; only like 4 or 5 ever have. So the rest of you have no argument in my option.

There are already pro known tournaments all over the world and hardly any of these guys are going. … Why? The same reason they don’t shoot in the pro class at an ASA, because they don’t think they can win. I’m not taking about the few that do but the rest. I personally don’t care either way because I will do whatever it takes to compete. And unlike some of you, I have a problem with the “every body deserves a trophy” attitude. You are either one of the top archers or you’re not. Put in the work and if you don’t have the time then guess what – Archery is your hobby… not your job!” 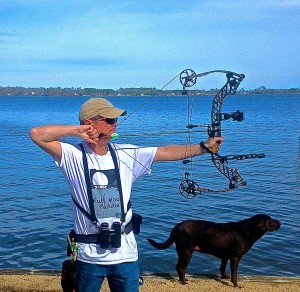 In archery the amateurs and the pro compete in close proximity during many tournaments. It is the same in triathlon. In triathlon the pros and the amateurs are essentially side by side, at least until the race starts.

What I notice in this similarity is that in both fields amateurs develop a unique relationship with the professionals in their respective sport. In that association I’ve seen amateur triathletes beat professional athletes – it happens! In archery, I’ve seen amateurs that could easily make money shooting as a professional. The money, however, is an issue.

Earning a financial living as a professional athlete is work. It is also a risk. If you have a few bad days at a regular job you’re not likely to find that job disappears. Pro athletes that have a slump are quickly in jeopardy. Furthermore, the average income (Salary.com) for a professional athlete in the US is $31,922 – not the big bucks of dreams. The income range for professional archers is: $10,000 – $75,000, for Olympic archers: $36,000 – $97,000. While top end of earning looks pretty good, the median in the US for all pro athletes is only $31,922.

If you want to be a professional archer – forget about the money. Do it because you love it. And you will have to put in the work. Take a bit of time and investigate the hours of training per day you’ll need to reach the top level of archery or any sport. When I started shooting a “Hot Shot” approached me to brag how he shot 30 arrows five days a week (That was probably an exaggeration). I assure you he was not a professional caliber archer.

When considering the potential of archery becoming a specator sport – that is a matter of finding the right professional “characters” and sponsors that recognize archery’s marketing potential. It has happened in other more difficult to video record sports.

Take cycling, the Tour de France for example – very difficult to record for television. Consider an Ironman event, even more difficult than archery or cycling to video. In an Ironman, the athletes swim away, next they get on their bikes and ride away, and finally they run away. Yet NBC has televised Ironman events for decades. Why do these sports get the media’s attention?

Think about the charismatic athletes that moved other sports to center stage: Cycling – Lance Armstrong, despite doping the man brought competitive cycling into the homes of America, triathlon – Mark Allen and Dave Scott’s Iron War, Julie Moss’ dramatic 1982 finish in Kona, then modern Queen Chrissie Wellington. The greatest promoter of a sport, and himself, in boxing is Mohammed Ali. If you don’t know at least two of those names you are truly focused on archery. Those athletes have powerful personalities  the media fell in love with them and so did the public. What does the public know about archery figures: Robin Hood, Katniss Everdeen of Catching Fire, or Hawkeye of the Avengers. We need a Tiger Woods or Venus Williams. I think, we have great and charismatic archers on the range – they only need so time to be recognized.

A few of the responses to John’s Facebook post complained about the price to play in archery. Cost, from my perspective is that archery is very reasonable. Let me point out, my entry fee for the Ironman World Championship in Kona, Hawaii was $850.00. By comparison, my IBO World Championship entry fee – $175.00. Specific to the equipment of the sports, my racing bicycle and wheels cost $7200.00. On the other hand, my current bow cost $900. My old bow cost me $1249.00 ( less than the price of one rear disc wheel for a racing bicycle) Archery is very fairly priced compared to many other individual sports including golf and tennis. None of archery is free. Is there money to be made, yes. Can you make more money doing something else – certainly. It comes down to this, “What is it that you want and what are you willing to give up to get it.”

As Levi Morgan suggests, should you want to shoot as a professional archery, well what is stopping you? And as John Chandler points out, “…don’t try to change the game to fit what they are not good at.”