Here in Tignall, GA my father-in-law, Ray, has 679 acres of land used for his hunting club. The members of the club are a few friends and family. The family members include, Ray, Wade, and me. The friends are Guy and Tim.

Wade is Ray’s oldest son and an attorney. Guy is Ray’s best friend; both are retired from the Army. Ray was an NCO and Guy was a Chief Warrant Officer and ex-helicopter pilot. Tim is the pastor of their church. It is a small group and we’ve never all been on the property hunting at the once. This trip only Ray and I will hunt.

Our prey was primarily deer and secondarily pigs. We aren’t in search of trophies; we are gathering food.

I take the Swiss approach so that the deer head debate remains between father and daughter. But, if a nice buck happens upon us in the woods – well what will we do? In this house there are 4 full head mounts and two racks of antlers. Ray and I have covert plans for future trips to the taxidermist.

The property here is well stocked with game. I have frequently noted that if we hunted with a Ford F-150 we’d never run low on stores of meat. Despite the clear success we’d have hitting deer with trucks, last week Ray resorted to a crossbow to kill a doe, which has been processed. This week he’d hunt using a black powder gun, his Pursuit Pro 50 caliber, made in Spain by Ardesa. I’d be using my Mathews ZXT. 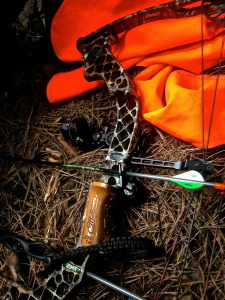 In the days before hunting the trail cameras, there are 18 of them on the property, revealed hundreds of photos and plenty of prey. There were: deer, pigs, raccoons, turkey and coyote tripping pictures of themselves. 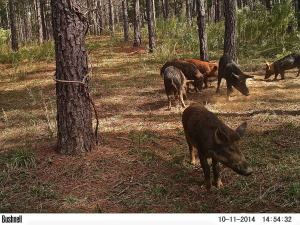 Wednesday would be our first day in the woods this week. Ray prefers going out in the afternoon. The time stamp on the pictures indicated anytime of day or night would be good. In the morning we gathered our gear and I took a few practice shots with my ZXT. Afterwards, we packed the gear in a truck, loaded a Bad Boy Buggie then headed for the woods. 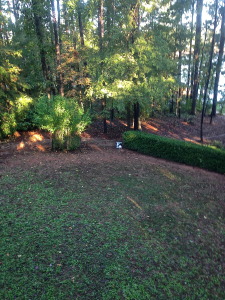 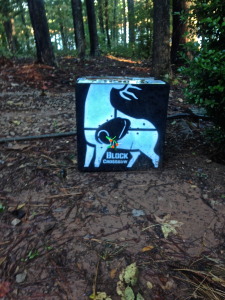 Ray and I hunted about a kilometer apart. For this day we’d be shooting from the ground. Ray dropped me off and took the Bad Boy Buggie to the blind he’d selected for himself. Before leaving he gave assurances he’d return for me at 7:15 PM. It would be dark by then. These woods are thick and the trails rough but he was confident he’d find me. I was also positive I could walk back to the truck if necessary.

Within an hour I heard the report of a 50 caliber. It came from the direction of Ray’s blind. I’d have to wait on learn the result of the shot. However, the gunfire made me optimistic. I remained optimistic up to 7 PM, until that time I’d only seen squirrels and birds.

Ray arrived at 7:15 PM. The gunfire had not been his; we suspect we have poachers crossing onto the well-marked property. Ray had seen two deer that never approached for a reliable shot.

Driving out of the woods, deer covered the red clay packed trails leading out. We’ll be back out in a bit to continue our hunt. I am certain there will be squirrels and birds.