This was a time-trial I had in the bag.  A time-trial on a bicycle is where each cyclist races individually against the clock over a set distance.  The distance for this race was 40 kilometers.

I’d started 3rdfrom the last, a good position.  Typically, cyclists are placed in the race line-up based on prior times. The faster cyclists start near the bottom of the order.

There was a light rain when the race started.  The rain increased and was coming down pretty good by the time I was off.  Many of the riders ahead of me were being cautious to protect against crashing on the wet roads.  Because I’d trained and raced often in rain I was more comfortable and it wasn’t long before I was passing other riders.

During a race on the roads there are often arrows spray painted on the pavement to alert riders that a turn is ahead.  This race was no different.

Continuing to work my way past the line of other cyclists that had started before me I’d spot one, overtake him, and move to the next.  Then, I ran out of other riders to catch.  It was, by now, pouring rain.

Approaching an intersection, which I felt was near the finish; I looked for the arrows on the pavement to know where to turn. The rain had either washed them away or they were covered by water.  I made the wrong turn.

I got lost for a while. I lost the race finishing so far behind that the officials were preparing to come search for me when I came to the finish line from the opposite direction.

At the IBO World Championship several years ago it poured rain.  Being in the first group out we had no idea that the tournament has been postponed until the storm passed. There was no horn that sounded. Apparently, the officials had forgotten our group was on the range.  We got turned around because the storm had blown away trail markers. You never want to find yourself walking out of the woods between a stake and a target.

I’ve been lost on training rides, runs, once in a race, and briefly during an archery tournament. Think it’s hard to get lost on a bicycle?  Go ride 100 miles and see how winding roads over unfamiliar ground seems then think again. Or do a 20 mile run in an unfamiliar city.  That can be especially nerve racking where English isn’t the local language.  Believe me, completing a 120 kilometer bicycle race in Italy and afterwards being unable to find the way to your hotel is extremely frustrating.  Heck, I had to ask for directions here in Georgia just a few weeks ago when a road construction site put me off my planned route. 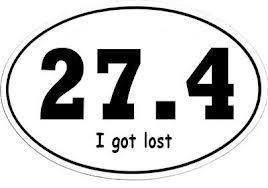 Getting outside and doing things can sometimes present a directional challenge. You can find yourself having a little unplanned adventure.  But, in the end, you’ll probably find your way home.