This morning, another spectacular sunrise over the water, River, my Lab, and I took a short run before I practiced shooting a 3-spot. During the afternoon, I headed onto the 3-D range. Neither practice resulted in perfect scores, although there were more than a few decent shots. 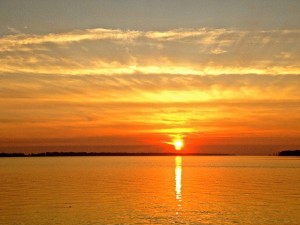 Shooting paper at 20 yards is a great way to start the day. Actually, a run starts my training for the day that is followed by shooting. Mornings are best to shoot because the wind is usually least during that time.

Even though it’s December, the temperature reached into the low 70’s and before the day was out I was in short pants. My kind of winter.

The morning session wasn’t my best and I ended up with a 581, using the new USA Archery scoring system. I’m struggling to get the release point just right on my hinge release. Adjustment after adjustment still it seems either too light or too heavy.

While shooting 3-D in the afternoon, I switched to a thumb release. I feel more comfortable with a thumb release, but my data is beginning to suggest I shoot a few points higher using a hinge style. The difference isn’t statistically significant, but statistical interactions aren’t necessarily indicative of finishing places.

3-D was pretty good despite I haven’t been spending as much time on that range as on indoors or aiming at paper targets. Because it was early afternoon and the sun was getting low a few shoots were very tough – it was hard to see the target. Nevertheless, it was a good practice. Ended up with a 206. (20 targets)