At the 2016 USA Indoor National Championship, in Snellville, GA., an archer asked me a question. She wanted to know if I’d done research that evaluated the fitness of archers. I have looked at calories burned during archery practice and a 3D competition. I’ve also measured the distances covered during 3D tournaments while walking. I haven’t, however, undertaken a serious study that measures archers’ fitness. Others have spent time looking at the fitness of archers. I’ve spent decades studying sports, fitness and general health. So, I gave the lady’s question some thought and came up with:

Decades ago I wrote a textbook (there is no money in textbooks) “A Systematic Guide to Physical Assessment.” Throughout that process I evaluated hundreds of people. During my career in medicine I took care of thousands of people. In sports science I’ve done research on elite and no so elite athletes. There are certainly times when I can look at a person and judge, to some degree, their level of health and notice obvious problems.

When the archer in Snellville asked me if, as a population, are archers healthier than other people. My answer was. “No.” She seemed surprised. I responded to her saying, “Look at the line, that is the general population.” (There may be a slight advantage to archers, but I’d guess not statistically.)

On the line was an obviously wide variance in fitness. The older the archers became the less fit they appeared.  However, the lack of fitness was not specifically dependent on age. Overall, the archers’ phenotypes didn’t match with triathletes, runners, cyclists, or folks in track and field. It made sense, the people shooting were all archers and they looked like archers. That is, they held bows and shot arrows. 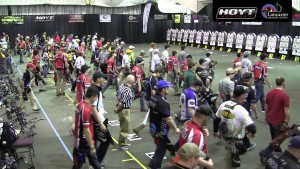 There’s a major cardio difference between most sports and archery, in archery we need to be very still. It is more skill and technique based than say running. It takes a lot of practice time to develop consistency and accuracy. Archers spend hours every day shooting. That leads to great archery, but not necessarily great fitness.1

There is a lot written describing core strength training for archers. There are recommendations for spending time in the gym lifting weights. And aerobic fitness is often linked as a key component for archers.1

The premise is that a very fit archer is going to be better at shooting than a not so fit archer. For an archer with decades of practice, i.e., Reo Wilde, maybe this isn’t exactly on point. He hasn’t been a model of fitness, but is a model for skilled archery.

Still, there remains a focus on core strength training for archers, with suggestions to spend at least two sessions per week spent in the gym. Aerobic fitness is also encouraged to ensure athletes are able to perform at their best both physically and mentally.1

In sports, clearly, being fit is better. In archery being fit means you’ll likely be able to lengthen your career as an archer. While shooting, fitness may enable you to practice longer.

What we do as archers is Specific Physical Training, (SPT). SPT “is an exercise, when performed correctly, which will increase the shooting strength, conditioning and endurance of the archer. An archer can perform weight training but this is more for injury prevention and also so the archer does not become “lopsided” in muscle development because, by its nature, archery will develop one side of the upper body more so than the other.” 2

Seriously, who wants to be “lopsided?” So, heading to the gym may not simply help add strength needed to steady a bow and drawing an arrow, it might help prevent asymmetric muscle development.

Then, there’s aerobic fitness. My guess is, if you are reading this, you are not a runner, cyclist, or triathlete. Most archers aren’t involved with aerobic fitness. Some are and I’ve written about a few I know. But, aside from the obvious health benefits of aerobic training, it can help with archery in other ways.

“Aerobic fitness and a corresponding ability to control the heart rate of the athlete in the stress of competition is of critical importance to the competitive archer. Aerobic fitness assists an archer in offsetting the fatigue that results from standing for several hours through a competition, where during the delivery of the arrows the athlete must be strong and physically prepared to compete. The high level of mental focus required to concentrate during every attempt at a target (the archer may deliver over 60 arrows in a single session) is best supported by a body that is fit.”3

“Archers employ a variety of mental conditioning techniques to prepare themselves for an event. Many of these devices include both visualization of the physical movements that the archer will complete to shoot a perfect arrow; other techniques encourage the athlete to use imagery to relax prior to the event”.3 (Quotes from reference number 3) That is not to suggest that the same isn’t applicable in other sports.  When I competed in other sports I frequently took time to examine a course (by car if the entire course wasn’t one I could ride or run beforehand) and visualized where I’d be on the course and how I would handle it. Archery, however, is a deceptive sport in terms of the approach to physical training and fitness required of the competitive archer. 3

“As a general proposition, the lower an archer’s heart rate, the steadier the aim. The rate at which the heart beats is a function of the autonomic nervous system, which controls other involuntary systems such as respiration. Most competitive archers employ one of a variety of deep breathing techniques prior to the actual delivery of an arrow to take the pulse to its lowest possible rate to create the greatest degree of stability and control over the delivery of the arrow.” 3

I enjoy archery. I also enjoy running, cycling, swimming, and competing in triathlons. I am always on the lookout for a race to enter that isn’t too expensive and too far from home. With all the travel I do to compete in archery, and because archery eats up a lot of weekends, it’s not easy to get in a race during the archery season. Nevertheless, I find the time to train as if there was a race on the horizon. It is my belief the training will pay dividends in archery. 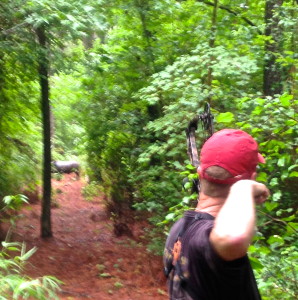 Someone recently asked me how many Ironman events have I done and if I am planning another. When it comes to Ironman ‘brand’ specific events I’ve done 3 of the full distance (140.6 miles) races, including the World Championship in Hawaii. But, I’ve also done 12 of the 70.3 Ironman races and 15 non-Ironman brand triathlons. I train everyday as if I were signed up for an Olympic distance triathlon (1500 meter swim, 40K bike, and 10k run.) I do it to stay in shape.

A full distance triathlon (2.4 mile swim, 112 mile bike, and 26 mile run) is ranked the 10th most difficult sports event, boxing is ranked number 1.4 Archery on the other hand is ranked 55th, above curling, bowling, shooting, billiards, and fishing. 5,6

Archery, as you can see, isn’t going to get anyone into top physical condition. It’s better than sitting all day, you will be working your shoulders and walking to retrieve arrows. But, it’s not going to give you a “work out.” Yes, you can fatigue shooting and yes you can get sore. But, if you want to really improve your health, you should add more exercise to your training. In the long run it is beneficial.

Granted, you might be offended to learn that archery isn’t one of the top sports for fitness.  You also might be extremely fit.  My guess if you are really fit, you didn’t get that way by shooting.

2 thoughts on ““Have You Ever Looked at Archers’ Fitness?””