We’re heading to Pittsburgh today. We lived there for several years. It’s a great city; it’s a cold city. The cold ran us Savannahians out of town after four years of frigid suffering. We left one of our children behind, our youngest daughter. She attended college in the Steel City. She found her husband among the locals and there they remain.

Over the course of their marriage they’ve had three children. This weekend is a birthday party for two of them. So, here we go, again.

It’s May and the temperature during the night in western Pennsylvania is going to the in the 40’s (F). We’ve packed our, once put away, winter apparel for the spring trip. We’ve also pack athletic gear. 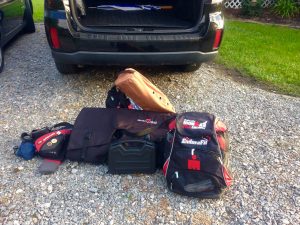 Among the gear is Brenda’s, my wife, fancy Yoga mat. I don’t do Yoga. I tried a couple of times, at Brenda’s encouragement – it didn’t stick. My gear includes running shoes, running jacket, and running shorts. It also includes my archery equipment.

There is a range nearby where we once lived, at Boyce Park. It’s an outdoor range and I’m going to give it a shot while we’re there. This should be a fun trip.

2 thoughts on “Heading to the Steel City”