Weather in Georgia isn’t too bad in regard to winter.  It is certainly a far cry warmer here in January than Cleveland, Pittsburgh or Baltimore, all cities where I’ve lived for enough winters to know.  Still, it can get cold and today starting out at 26°F was cold enough.  The cold can’t limit one to the indoors.  Especially, aside from the cold, it is nice outdoors. 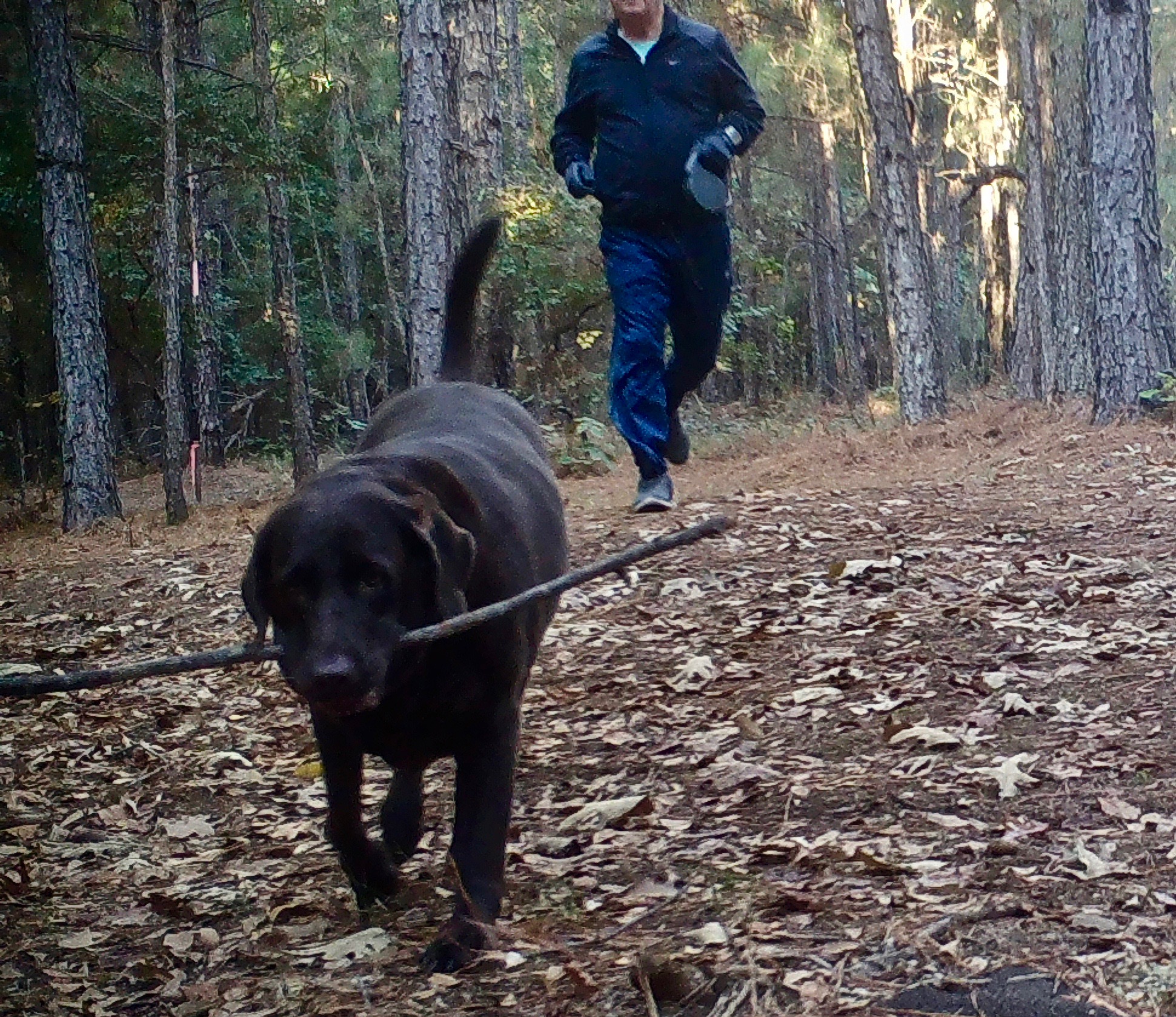 Each day River, my nearly decade old Lab, and I run.  In the cold she’s too happy to hit the trails.  She becomes less energetic during the peak summer months.  River has jumped into water, breaking through ice, during the coldest times, just for fun.  She is built for it.

When it is cold I prefer to run, skip cycling (when temperature drop into the 30’s – something I didn’t do decades ago) and head to Ace Hardware in Social Circle to train on their indoor range.  This is perfect right now when preparation for 18-meter tournaments is on the agenda.

Ace’s archery range isn’t open on Mondays.  I skipped archery in the morning and used that time to run errands and hit the gym.  This is my normal routine. It was also time for a haircut.

Here in Georgia our 3D competitive season is about to begin this Saturday.  During the afternoons, after the temperatures have risen a bit, I’ll practice 3D.  Today was the first time I shot my 3D targets.  I’ve been shooting the 3D bow at paper trying to get a feel for the lighter equipment.

I’d hoped to compete in the ASA Super Senior division in 2020 but that’s not happening.  My target bow, ideal for that class, is set for indoors.  I have just enough equipment for that bow to remain specific to 18-meters and enough to use my hunting bow for 3D. Sure, I could switch the sight around for the 3D arrow but that means taking a chance and screwing up what is right now working.

Plus, it isn’t simple.  When outdoor season begins I’ll use skinny arrows not 23s.  Switching back and forth between practices, outdoor target and 3D, with a single bow isn’t optimal.  If it isn’t simple, it simply won’t get done.

I’d considered buying more gear to assemble a 3D target bow to macth equipment in the Super Senior class but dropped than fantasy after reviewing the price.  2020 3D will end up another season of competing in the hunter class shooting against younger archers.

My first day shooting the 3D faux-animals wasn’t too horrible.  Getting a feel for pins versus the scope I’ve been using has taken a bit of adjustment.  Plus, the lighter bow means really being careful to hold properly.

Generally, the practice went well. I shot for a couple of hours and scored a few 8s.  Mostly 10s where the score of the day with a few 12s for good measure.  There was one miss.

The missed shot was 33 yards and I messed up with the pins.  For 33 yards, a yellow 30-yard pin sits on top of the ten ring and a green 35-yard pin sits on the bottom of the 10 ring.  I screwed up by putting the green 35-yard pin on the top of the 10 and the other yellow, the 40-yard pin, on the bottom of the 10.  It was a small boar target and the arrow bounced off the spine of the foam boar.  Fortunately, the bounce slowed the arrow; it smacked a branch and landed, undamaged on the ground.

After a couple of hours in 36°F temperature I called it quits.  I considered a bike ride then thought better of it.