The morning practice went as planned.  Two hours on the range being coached for an hour of it.  Being coached is harder than regular practice.  As lunchtime approached it was time for a break.  My brain was full.

The plan was to get home, eat, wait for the HVAC guys to come and check my furnace.  Then practice again in the afternoon. Things had seemed off with our heating system and it needed to be checked. Things were off – in fact when I got home from practice there was no heat.

The HVAC repairman showed up right on schedule.  (Imagine that!)  He begins checking things in the attic. Rather than using a screwdriver or some other tool to initiate his deliberations he starts sniffing. Sniffing?  (Is his nose running?)

His nose knows.  He opened the service disconnect box to discover the thing has burnt slap up!  (Can’t say enough good about the smoke detectors in our house.) 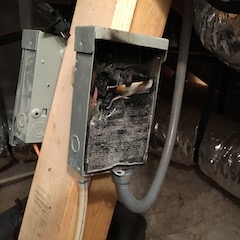 Luckily, we didn’t catch fire here.  Even luckier, the electricians that cover our warranty were here within a few minutes after I called.  (Wouldn’t you be if you’d installed something is a house that caught fire.)

Repairs were made at no charge.  But, the afternoon practice when up in a blast of electrical components.

(When the electricians were leaving I showed one of them my target bow.  He didn’t have it in his hand 3 second before he rears back on the string and draws the bow.  Nope, no arrow.  Yep, I was yelling, “No, no, no..”  Thankfully, my alarm suggested caution and he eased back on the bow string.  This is the last time anyone touches my bow other than a bow tech)