Some asked me to write an article about archery as portrayed in the Hunger Games.  Tradition archers would no doubt be put off by anything someone that shoots a compound bow might surmise regarding their bows.  It’s not that I don’t like recurve bows or long bows – I really like both – as it is I shoot a compound.

Nevertheless, I began looking around the internet at what was already written about Jennifer Lawrence’s role as Katniss Everdeen and archery.  A lot has been written.

I think the Hunger Game books and the movies have been good for archery as a hole.  Granted, many of the shots in the movies are a bit unreal, but it is a fantasy movie.  I watch fantasy movies for fun.  If I want to learn something I watch a documentary or better read a book.  Better still, I read peer review journals and often conduct my own research.  That’s a really good way to learn.

When is comes to fantasy, well peer review publications aren’t a staple. So, I turned to the always accurate internet. I did find a really good article.  After reading it, it seemed so much wiser to simply share it with anyone that is interested.  (Antonio – here’s the article)

Below is an writing by Teresa Johnson that illuminates some aspects of the equipment used by Lawrence in her role as Everdeen.

Jennifer Lawrence’s popular character and expert archer has switched bows several times during the series. Those changes started with “The Hunger Games,” when she shot two different bows. In “The Hunger Games: Catching Fire,” Jennifer Lawrence sported a Hoyt Buffalo. And the mystery of the “Mockingjay” bow has been solved: J-Law is shooting a Savannah bow from Martin Archery’s Damon Howatt line.

Lance Irving, Chief Sales & Marketing Officer at Martin Archery, says the bow is lightweight, easy to use and – in his opinion – has the right look and feel for the blockbuster hit.

“We are extremely honored to have one of our most popular traditional bows selected by the ‘Hunger Games’ team.  From what we understand, they wanted to go for a different look and feel as well as have Ms. Lawrence’s input from a shootability standpoint in the final installment of the movie and our Savannah checked all the boxes,” stated Irving.

Katniss’ Bows: An Evolution Fit for a Revolution

Katniss Everdeen’s first bow, a longbow, appears in the beginning of “The Hunger Games” as she hunts squirrels with Gale Hawthorne (Liam Hemsworth). Katniss’ longbow is made of wood, and appears to have additional material on its top limb. We asked Olympian John Magera, a dedicated barebow shooter, what it might be.

“It appears they tried to re-create a fairly common repair you see on many Native American bows,” Magera said. “When a limb developed a crack, the Native American [archer] would wrap that part of the limb with sinew – tendon from a mammal – to keep it from breaking. That’s my best guess. If I were in her shoes in the movie, and my limb started to crack, I’d do the same thing, so it’s somewhat realistic.” 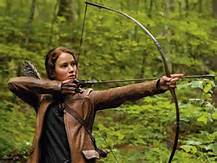 As the movie progresses, Katniss gets her next bow from the Cornucopia of Doom (OK, perhaps a little dramatic), which turns out to be a whitish-gray recurve bow. Again, Katniss shoots barebow-style: just the bow, an arrow and the bowstring. We presume she has some kind of a rest to hold the arrow in place, or perhaps she’s shooting off a felt or fur pad on the bow shelf, which would make sense for a barebow archer.

In “Catching Fire,” however, our reluctant revolutionary makes another equipment change, this time to the Hoyt Buffalo and Easton X-7 Eclipse arrows.

Mike Luper, vice president of sales and marketing for Hoyt, explained: “The Hoyt Buffalo… already had a movie history, since Hawkeye shot it in ‘The Avengers’ movie. The movie’s director, prop master and actress all had input in selecting the bow for ’Catching Fire.’