The past month or so archery has been focused on shooting known distances while preparing for and competing in the NFAA Sectional. There was one 3D tournament, with unknown distances,  I’d hoped to compete in during this interval, but it was canceled due to weather. So, this morning’s practice was in the woods working on yardage.

You know what they say; if you don’t use it you lose it. It wasn’t too bad judging yardage. I did, however, lose one arrow shooting at a mountain lion target 50 yards out.

Aside from that one shot the others were okay. Even so, I had yardage correct on that missed lion shot. Fifty yards is pretty long and the arch of my arrows is noticeable at that distance. I might have hit a low hanging limb when going for that mountain lion. All the other fifty yarders were on target. 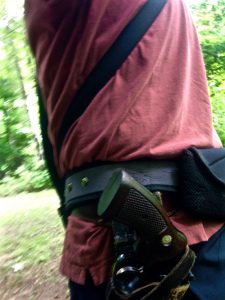 In these woods, there is an abundance of snakes. I practiced for three hours and forty-five minutes and didn’t see snakes today. Water moccasins are plentiful this year. As a result we’ve already shot eight if those aggressive vipers hanging around our dock, on the bulkhead and in these woods. When I go into that thicket I bring a little pistol in the event I walk up on a poisonous snake. I leave the harmless ones alone.

Granted, I do have a bow and arrows with me. But, when it comes to a snake that could kill me I’ll take whatever advantage I can get. Plus, when I go to pull arrows, I may not have any more in my quiver or my bow might not be in my hand. I keep the revolver on my hip – just in case.

What I wanted to do today was shoot the same target from around 20 yards to 50 yards. I shoot each faux-critter about eight times each at a variety of points near and far. I also changed the angles and positioned myself so that the targets weren’t all straight ahead. There are eleven foam animals on the range, which meant around 88 or so shots excluding my warm-up on a flat paper target.

This afternoon I’ll repeat this practice session and continue with this form of practice until Friday. On Friday I’ll be headed to Maryland for an IBO Qualifier.