This has been a great day. Nice sunrise and perfect temperature. Plus, we, Brenda and I, did not need to drive anywhere so we would enjoy the entire day.

We’ve been organizing to remodel our home in Hertford. That has meant spending a lot of time looking at stuff for the house. There is not a room that will be untouched by the work. We are spending a bundle to renovate; it will be worth it in the end.

When we do get a day free of renovation work and travel it is used to the maximum. Like always the day starts with a run. River, my lab, and I head out early, sometimes – especially during the winter – it is still dark when we run. There are essentially no cars on the roads where we run. If a car does approach it can be heard long before it nears. I make certain neither of us is close to the road when it passes. Today, there were no cars. There were, as always, ditches with water to splash and carcasses to taste.

I don’t run in the ditches but River can’t avoid them. Yes, she gets stinky. She often enhances her aroma by rolling in a tasty carcass. If she finds something wonderfully rotted I sprint toward her saying, “No, No!, NO!” to prevent the taste and roll. It was a mad race.

Today, I succeeded in preventing a taste and roll, to her remorse. I will add that River jumps into the Little River after every run. Not a soap bath, however, a vigorous post-swim rub with a ‘dog’ towel followed by a brushing  helps abate the stench.

After running it was time to shoot. Morning archery practice takes 1 to 3 hours. Mornings typically have less wind so it is a great time to sight and shoot from long distance (up to 60 yards). Today, practice was an hour and a half. It was dedicated to release work. It was also working from 20 meters as I prepare for the indoor season. Long shots would come in the afternoon despite the potential of wind. It was a very good session.

I take a break mid-day for lunch then do some other activity like ride a bike. The weather was so nice and the water so calm bike riding was going to be replaced with either a long swim, paddle boarding or kayaking. I asked Brenda if she wanted to go kayaking. She agreed and was ready in minutes. We were both eager to enjoy the water. 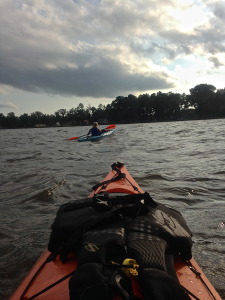 From where we live, across the Little River, there is a small creek we’d not yet explored and we chose it for our destination. We launched two of our Necky boats onto water that was totally flat and without breeze. At least those were the conditions when we departed from our bulkhead. Wind can come up fast off the Albemarle Sound. 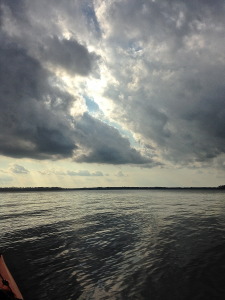 We were only paddling 1.5 miles to the other side of the river.  Less than midway conditions changed as if someone had thrown a switch. Flat water changed to whitecaps on top of two-foot to three-foot fast rolling swells. There aren’t any rocks or obstructions in the water but we were rocking and rolling. ( Sorry, no pictures, it was too rough and I was afraid I’d drop my camera in the water. I wished my GoPro was onboard)

Two to three-foot waves don’t seem like much and aren’t unless only a few feet separate them. In a boat where you are sitting at water level and the cockpit is only a few inches above the surface – two feet is plenty. We’d slide down the side of one swell and get splashed by the next as we rode up. Both of us got soaked. It was wonderful.

Neither of us was in great danger of flipping. We frequently head out into similar chop. However, we are usually paddling into the wave so we can turn and surf them. Today we were paddling parallel with the swells.

Once on the far side of the river the trees blocked the wind. We tested the creek that ended in a swamp after a short distance. There are some massive homes on that side of the river so we paddled past and admired them before heading back into the wind.

On the way back the chop wasn’t as severe but seemed to come from all directions. Brenda hooped and hollered as she bounced her boat on the water. Getting out of the boats was a small challenge but we managed it without getting anything other than our feet wet. Not that it mattered, we were already soaked.

Soon after we cleared the boats, the wind returned so I canceled my afternoon archery practice. The range felt like a wind tunnel. Instead, I finished the day following baseball, writing, and waiting for Thursday night football – Vikings vs. Packers. The perfect end to a great day.