During last week’s 3D tournament, I heard the folks around me bragging about how many 3D animal targets they have on their property. One fellow claimed to have 10 another 30! Watching them shoot it seemed clear they knew where to aim their arrows.

Earlier in the year I made a particularity bad shot on a coyote (I found the arrow). The guy  shooting after me mentioned, “Yes, those little buggers used to give me trouble, too. “ He then added, “So, I bought one and after awhile they didn’t bother me anymore.” It sounded like good advice.

Last week I added three worn-down, shot-up, weather-beaten, bird-pecked, and sun-bleached, used 3D targets to my prior collection of one. It seems that practicing on the objects that will be shoot at in tournaments might improve my scores. Having added new (well new to me) foam to my menagerie I am preparing to test that theory.

To create a more realistic range I called my neighbor, Carl, and asked if I could make a mini-3D course on his property. He has several wooded acres that are crisscrossed with paths. Carl also hunts with a bow and I explained he’d have full use these of faux-animal. Carl said sure and the next morning I setup the range.

While in the woods with my animal models, I came upon a spot that looked like pigs had been rooting. Wild pigs can a problem and I wasn’t overly pleased to see sign of them a hundred yards away from my front door. My wife’s and neighbor’s gardens could end up tasty treats for the varmints.

The pig investigation didn’t slow me down very much from the task of selecting the idea and most natural position for my foam targets. Once they’d all been arranged I shot at them and my other flat targets for a couple of hours. The mini-3D range is pretty good. I’ll need to collect more fake animals and continue working them into the wood. 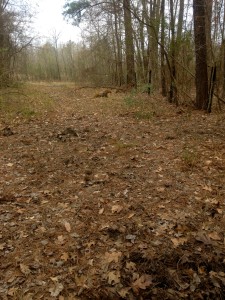