There’s a lot of movement that goes into shooting an arrow. Watching archers you’d see them lift a bow and let go an arrow. In fact, there are over 100 steps involved when an archer shoots an arrow using a recurve bow. If the archer is using a compound bow there are 78 steps involved in shooting just one arrow.

That is a lot to learn, put in exact order, and shoot a good shot. The motions for shooting an arrow are listed in 11 major steps. Each of those steps involves subsets of movement to reach perfect form for that perfect shot.

Practicing these steps, rehearsing them in your head during the release of every arrow seems overwhelming. It isn’t that difficult. Before long you move effortlessly through each shot. But, you still plunk out less that perfect scores. 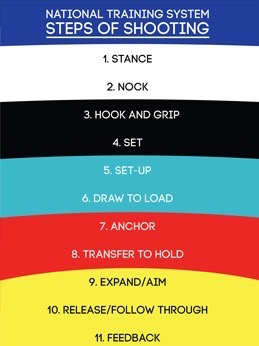 If you are a serious archer you may have found ways to move through a shot sequence, touching on the steps needed to assume good form, that work for you.

Good form comes with practice. For the purpose of this writing we’ll assume each of you has developed good form. But, you still find that you are not landing arrows consistently where you want them.

After years of practice you might have gotten a bit sloppy or lazy and no longer think though the shot process. Why should you, you’ve done it thousands of times. Here’s why: You need to move your thought process from a conscious one focused on making a good shot to a sub-conscious one that shoots the good shot. If you are thinking too hard about the shot, you’re working at it too hard and not letting it happen.

Now, I am taking for granted you are a well seasoned, practiced, and coached archer.

Here’s a little something to try that might help you get through those 11 steps of shooting that you know well (and have abandoned):

As you take the line you think about your stance. Get it right. Easy enough.

You nock an arrow. You hook and grip your bow. You set up, go to set, draw to load, anchor, transfer to hold….

Here you might find words or phrases that help you switch over to your subconscious brain and let it make the shot. Here’s an example:

Think, ‘Put the dot in the middle, relax, shoot the dot.’

Of course, before you can reach this point, you need to understand the 11 steps of shooting. Once you have master those steps look for your process to give the shot over to you subconscious.