Swimming was my primary focus for today’s cardio training. Since it’s been raining non-stop swimming at the YMCA was perfect. Then, it was onto 3D or indoor archery depending on the weather.

I have a triathlon in a few weeks. My goal for this workout was time. I did a swim time trial for the distance I’ll be swimming in the June XTerra triathlon. The distance is not an issue. What I wanted to know is how slow (or fast) I might be over the 800 yards (sprint distance) for the triathlon. Whatever time I have the in pool it will be faster than open water. In open water it’s harder to keep a straight line. I tend to zigzag from buoy to buoy.

Heading back to my Ford F-150, after the swim, I was pleased to see it had stopped raining. Not really wanting to shoot indoors I knew I’d be on the 3D range soon. I’d recently gotten a new 3D target, a bobcat, and was eager to stick some arrows into the small cat.

Before I got to my new target I spent time shooting a bear, badger, coyote and turkey. Progressing through the range, I was anticipating the new animal. Shooting the same old targets day in and day out is fun, but a new target is exciting.

The bobcat is certainly a small target. Where it’s placed on the range the maximum distance it can be shot is 32 yards. That seemed like a good place to start. The rings on the bobcat are barely visible using binoculars from 32 yards. This wasn’t a freebee shot.

The cat sits so that it’s in a tunnel of foliage. From the stake, which is in the open, the shot enters a closed in path. This was done in an attempt to make the shot more difficult.

I’ve seen bobcats similar to this one during tournaments. Each time the faux Lynx rufus was sitting straight down a lane less than 20 yards from the stake. Granted, it is a small target and during tournaments small targets are frequently arranged less than 20 yards from the stake. Small targets aren’t always so close. The last few javelinas I’ve had to shoot in tournaments were at 40 plus yards. I silently cursed before I took my shot.

My inaugural shots on the bobcat were a ten and an eight. The eight was the first attempt. I tried a few more times to hit the very small center ring from 32 yards – never got it and moved onto the next animal. 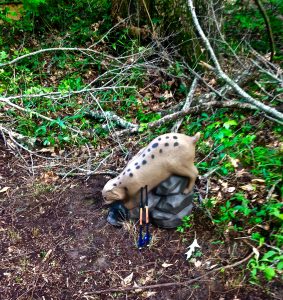 Where I wanted to spend some time was on this pig that is situated so that trees and angles make up the challenge. I have three stakes for this pig. There’s not much different where distance is concerned, two shots are at 37 yards and one is at 34 yards. The trick is to get the arrow between the trees and hit the pig on a slant for the longer shots. At 34 yards the shot is nearly straight on.

What’s happened, as summer approaches (come on warm weather) is that the foliage in the woods has darkened everything. The black boar’s rings are impossible to see. Shoot it enough and maybe the rings can be committed to memory. If only all the pigs I see in tournament were at 37 to 34 yards and the size of this one.

Back in the woods, out of the wind, I have a couple of targets where longer shots are possible. One is a Rinehart deer that, at the moment, has a 55 yards maximum range. There’s also a mountain lion, that if I wanted, I can shoot at from 100 yards or more. Note I wrote, “shoot at” from 100 yards not hit from 100 yards. I’ve never tested a shot over 85 yards. (I found that arrow cutting the grass last week) 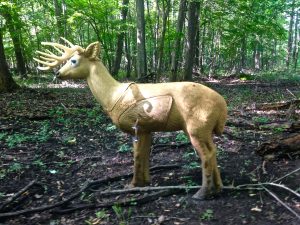 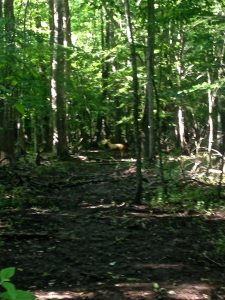 Practice kept me in the woods for around two and a half hours this afternoon. Not a bad way to spend an afternoon. The lighting in the woods because of leaves gives this forest a very different appeal than the bare trees of winter. It sure beats sitting in an office.