I just finished reading Greg Moriaties book The Zero Athlete. I read a lot of books. Many are non-fiction and among I occasionally pick up one that might have a pearl or two in it that might help me become a better athlete. Many of them are so much of the same but every now and again there’s a tidbit of something I haven’t heard or read. I picked up a couple of ideas from Moriates’ book. There was one theme that has been common in a number of books, take a nap if you can.

Taking a nap is nothing new for me. When I trained exclusively in cycling we’d often ride 60 miles in the morning and another 60 in the afternoon. We’d get in about 20,000 miles a year. It was a lot of riding. Our coach used to preach to us, when we weren’t on the bike, “Don’t stand when you can sit, don’t sit when you can lay down.” During the mid-day, the team would often be laying down, taking a nap before the afternoon training session.

I’m no longer hoping to earn a spot as a cyclist on an Olympic Team. That dream died in 1980. Following the mess with the 1980 Summer Games in Moscow and getting hit by a car during a training ride, my wife, Brenda, suggested I get a real job. That meant finishing college and that meant no more racing or at least at the level I’d been prepared to race. Some things, however, didn’t change, and one of those was the mid-day nap.

My body had become so accustom to taking a nap after lunch it was often a struggle to stay awake in class and at work. I eventually learned that if I didn’t eat very much for lunch my circadian dip wasn’t as severe – so I managed.

Today, I have different goals set than I did in 1980. My career and work goals accomplished, I set new goals around athletics. Certainly, I’m not going to race bikes or do a triathlon competing against 20 and 30 year olds. There are only two sports where a 60 year old can compete, pretty much equally, with a 20 or 30 year old athlete: shooting and archery.

Because I love to compete, I decided, in August 2013 to buy a compound bow and learn how to shoot it. I’m still learning. I’m also still riding a bike, running, swimming, and lifting weights. All of this exercise is demanding. It’s also a lot of fun. One thing I now have the luxury of is the mid-day nap. I do my best not to miss it. 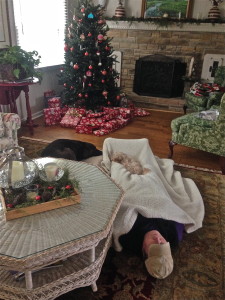 I don’t nap long, rarely over 20 minutes. I don’t get in the bed or lay on the couch. I lay down on the floor. I don’t want to be too comfortable and slip into a full sleep cycle. So, the floor is fine, as is Stage 1 sleep. It’s a light nap I take between morning training and my afternoon training. And everyday, I share the time with my dogs.