PGF Archery was on my list of places to go yesterday. I needed a new block target. My targets are really shot to pieces. They’ve been repacked and duct taped so many times it is amazing they ever stop an arrow.

When I got to PGF Archery I looked over the inventory and thought I might be in trouble. There were no big blocks. There were a few smaller blocks. Sadly, in my experience the small blocks only last weeks before the center has been shot out.

Bumper Williams , owner of PGF Archery, mentioned he had some 3D targets received in error. A local group had ordered 5 Rinehart targets. These targets were shipped and sold. Then, to his surprise, Rinehart repeated the order reshipping the five targets. 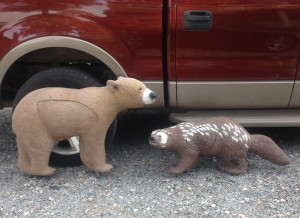 Bumper called to let Rinehart know of they’d made an error. Rather than pay the return shipping, Rinehart asked if perhaps Bumper might sell the targets at cost with an additional discount. That was the deal that crossed my path.

I picked up two of his 5 Rinehart’s, the bear and wolverine. This brings my total to six 3D targets. I am considering buying the remaining three even though only one of them, a hen turkey, is something I want. The other two are a baboon and a mosquito.

The bear and the wolverine will be on the range today.