This morning after a run I headed into Elizabeth City to practice on an indoor range. The wind at my home coming off the river was simply horrendous for archery, great for sailing, not so much for shooting. As usual, when I show up to practice early in the morning I had the range to myself, at least for a time.

Today, a mature fellow was in the shop having some bow maintenance done. When it was completed he walked over to the range to give it a test. With him he had three arrows. Since I was shooting a 3-spot, I was working with 3 arrows. So the shooting would align fairly evenly.

He said he only wanted to shoot a few times to make certain things where correct with his bow. He was polite and not at all a bother to me in the least.

When he asked me the distance to the target, 20-yards, a red flag popped up. But, I dismissed the mental caution assuming he was trying to make conversation. He interrupted me between arrows, I’d fired 2, and so I informed that the distance was 20 yards and invited him to go ahead a shoot – I’d wait. He shot 1 arrow while I shot my final one.  Then he offered to stop so I could retrieve my 3. He, too pulled the one he’d shot.

On the next end, we each had shot 2 and I was preparing to shoot my third arrow. I was at full draw. The man had been standing on the line next to me a few yards away. Then, out of the corner of my eye I noticed he was walking down range.

I was at full draw using a hinge release. The release had already clicked. I froze and began saying, “Whoa, whoa, whoa!” as I carefully let down. 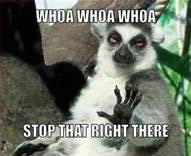 What was going through this guy’s head? He did stop, but good Lord – who walks out potentially in front of an arrow. It was a first for me.