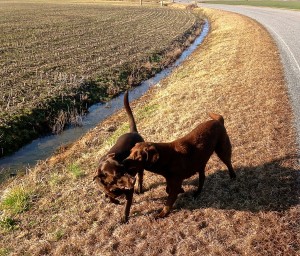 River, my dog, and I began our day as usual with a run. Along the way we were joined by one of her friends. Once home, it would be archery practice.

Before I could shoot I needed to provide cookies to both of the furry runners. River’s friend decided she’d come in our house to visit Brenda, wag a bit, and depart with a Milk Bone.

The day was warmer than yesterday but the wind was still blowing. The wind was forecast to reach gusts of 25 mph. “Wind” is not a friend to archers.

The wind, at times, seems to be organic and with malicious focused intent bent on ruining every shot. With each draw of an arrow “Wind” appeared to increase its effort to push my bow and me. I’d have to let down then “Wind” would let down. I’d reach another draw and here would be “Wind” pushing me around.

From the very start “Wind” joyfully began efforts to remove my paper target. That plan of “Wind’s” was spoiled by adding extra roofing nails to secure the target. I, also, added a 2 X 6 board behind the target to help hold it in place. But, “Wind” would not be deterred and only increased its intensity to spoil the day.

Naturally as the struggle continued I became more frustrated and determined to overcome “Wind”. Sadly, in the end “Wind” was victorious.