We’ve got a bit of winter bothering outdoor archery practice here in eastern North Carolina. Along the coast it’s not a bad as in the western mountains of the state. Still, it has been too cold and windy to shoot outside. The weather hasn’t had a negative impact on running, in fact, it has been great. River and her friend Coco, as always, have a blast while running with me. I have as much watching them as they seem to have with each other. 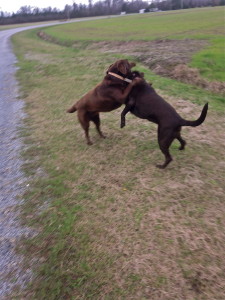 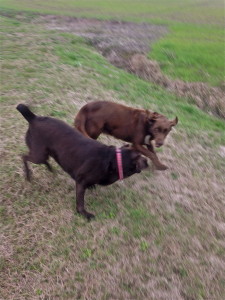 River and Coco turn every run into a game. There’s a lesson in their pleasure.

Shooting in breezy cold conditions can be frustrating. The temperature warmed from a high of 29°F to 51°F yesterday. Today it will again be in the 50’s and tomorrow we may hit the low 60’s. But, with that warmth we are expecting rain.

The weather sent me into Elizabeth City, NC to practice on an indoor range. I try to shoot inside about once a week. Indoor lighting is very different compared natural light so I head inside to stay accustom to the dissimilarity. Usually, I’m there by 10:00 AM and have the range to myself. This week, on both occasions, I ended up shooting inside at around 2:30 PM. On those occasions, I was not alone on the range. Two small groups were already hard at practice. A set of sisters, monitored by their Mom and a young fellow with his Dad.

This week during both of my indoor sessions on the range  there was Mom overseeing her two daughters’ practice. I asked them how was it that they weren’t in school. Mom replied her children were home schooled. Part of their educational activities included physical education. Encompassed in that course is 1 hour of archery practice every school day.

The oldest of the two girls, probably 13 or 14 was a terrific archer. Shooting a Vegas style 3-spot she rarely hit anything lower than a 9. The younger child, maybe 9 or 10, was less accomplished but clearly on her way to catching her older sister.

On the second day of indoor shooting  another family was at the range, a father and son. Where the girls were shooting “beginner bows” the Dad and his 14ish year old son had the most expensive gear. Dad told me he’d  gotten a deal on the bows. I got the whole story of their equipment acquisition, along with more information and talk than I needed or wanted.

Dad knew equipment; well Dad proclaimed he knew a lot about equipment. The father – son duo, singularly were geared with tackle that exceeded the cost of mine and the girls combined.

Dad asked me how I liked my bow and I replied, “It seems fine.” He explained how he’d, “Looked at that bow but decided against it.” From there he offered an oral dissertation of what made my bow inferior. Dad further complained that one of the world’s top archers had recently announced he’d switched from his famous brand to my inferior brand bow. Dad further doubted that the world-renowned ace archer had in fact simply picked up the new inferior bow and shot a perfect 300. Personally, if the pro was shooting a 5-spot, my guess he is had shot a 300.

Despite the substandard equipment of the other archers on the range, if I’d had to place a bet on who’d score over the others, minus me, my money would have been on the older home schooled young lady. She was clearly a better archer despite her $200.00 bow and discount arrows.

There was a major difference between the two middle schoolers. The boy, a pretty good shot, was decked out and looked like a professional. Lancaster Archery towel adorned quiver on this waist, expensive $25.00 arrows, $1600.00 bow, cap and shooting glasses. Aside him Dad was coaching him between shots. The boy would shoot, they’d hike to the target, take out a pen, mark the shots, record the count, and discuss.

The older young girl, Wal-Mart arrows (3) supported by the range’s PVC holder, no cap, long-sleeved t-shirt displaying an ad for some band, holding an inexpensive bow and conducting an on-going dialogue with her sister. The subject ‘not-archery’ was some heated debate that volleyed back and forth with too much speed and fury for me to follow. Somewhere during the deliberation the youngest sister got the hiccups and now the argument became a game of some sort – judging from the giggles. Mom sat reading the paper oblivious to her students’ verbal battle.

Aside from the vocal differences of the pairs, the equipment variances, and the boy’s ‘correct-look’ what I observed was the girls playing, having fun. The boy didn’t appear to be having as much fun. He seemed to be working hard to present a ‘look’ while the girls had fun shooting. He seemed very serious if not a bit cocky.

Part of any sport is the pleasure derived from playing. The girls weren’t stressed. They really didn’t seem to have a care and they both shot really well. The older, as I mentioned was better, the younger not far behind. The young boy, determined and serious, seemed to be working toward projecting an image and perhaps missing the point.  Or maybe his real target was on the opposite side of the range wearing a long-sleeved t-shirt. He appeared to be missing on that goal as well.

When it was time for me to leave I pulled my target in order to put it in the trash. I headed back to the bench where I’d left my coat. I’d laid my paper 3-spot on the bench. Dad came over to once again ensure I realized that my bow was inferior in every aspect of archery. I’d had a pretty good day of practice. While Dad was lecturing me I picked up my target and rather than crumble it I folded it, hoping Dad would notice all three centers were missing. I doubt he noticed and if he did he made no comment that might interrupt his criticism of the bow that so offended him.

Like running the most fun and best results seem to come when we simply enjoy what we’re doing and not worry too much about the outcome. Something River and Coco try to teach me everyday.

4 thoughts on “Archery and Running with the Big Dogs”