It was hot, 94°F, and no complaint from me. I’d been outside all day. I’d run, shot for 2 hours, dug up 15 Lenton Rose bushes at one of my daughter’s homes, loaded them into my truck, then replanted them at our home. I’d planted Ivy, had a nice lunch, took a 30-minute break and was heading out for a bike ride before afternoon archery practice.

Because it was hot (and I was wiped) I had planted a nice easy ride. When I grabbed a kit for the ride I’d pulled out an old Vapotherm jersey. The jersey is about 12 years old. Vapotherm is a medical device company that makes a product to help people breathe. It was a total random thing grabbing the jersey. It could have been any number of other jerseys. At any rate I wore it. 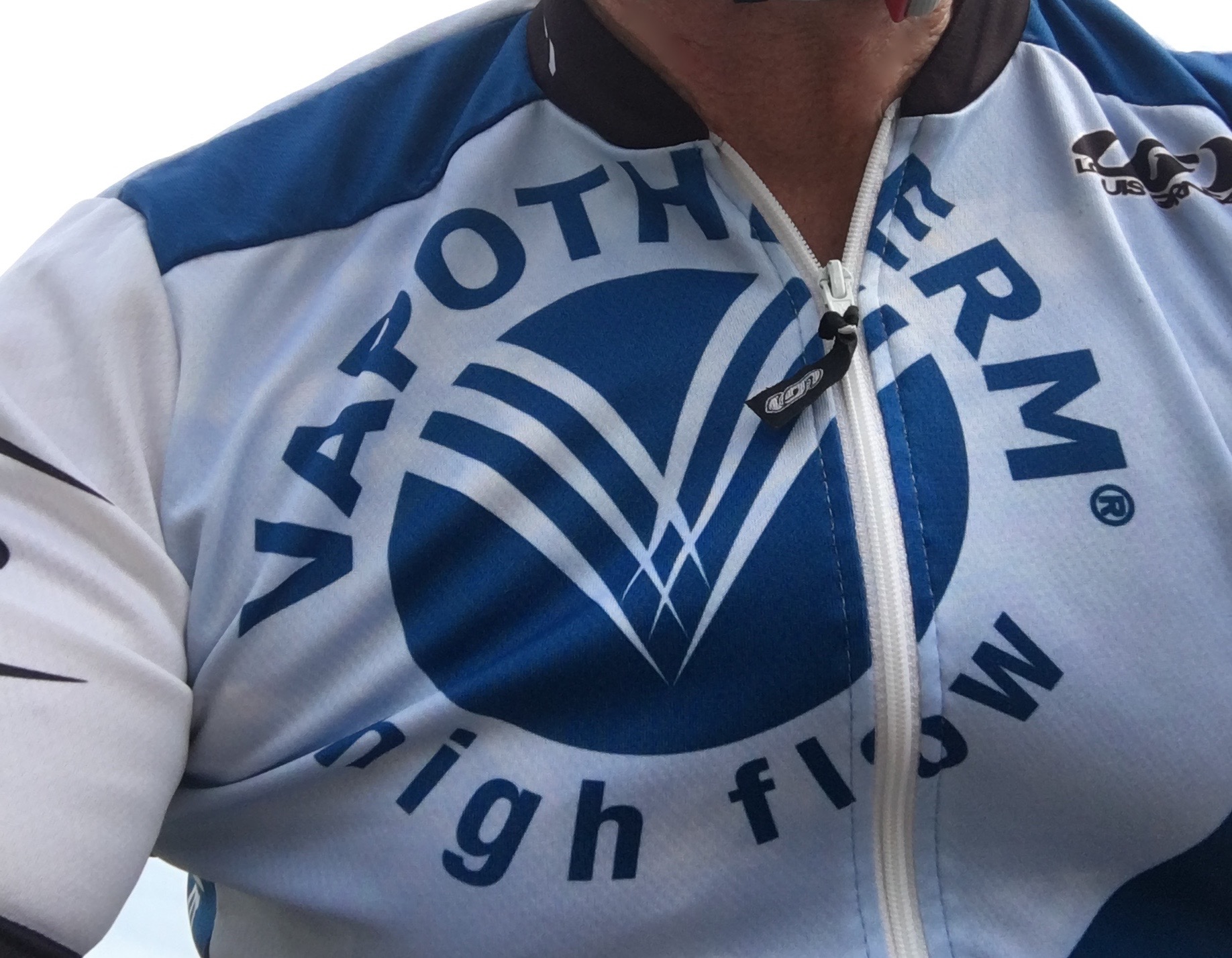 On the ride I thought it might be cool to send a picture of the old jersey to friends that had also ridden wearing a similar jersey a decade or so ago. I slowed down, coasted, and tried to take a selfie of the jersey. The result of that is shown here.

While doing so a “hot shot” on his bike zoomed past me. I was maybe coasting at 7 mph. He was cruising at around 20 mph. He said a cocky, “Hello” and didn’t slow down. No problem except for the cocky tone in his voice.

Putting my phone back into my jersey pocket I put some power on and chased the hotshot down. Now, I didn’t exactly catch him. I didn’t want to be any closer than about 5 to 10 yards. Just close enough that he would know I was back there.

He appeared to be a competitive cyclist as evidence by his shaved legs and cocky attitude. Going through his ears was now the sound of another cyclist behind him but not on his wheel. He can do a few things: 1) keep the same pace, 2) speed up and see if the can get rid of the bothersome unknown rider, or 3) slow down and see if the rider in the back could be a new friend with whom to train. The latter is the choice of a gentleman. He chose the option number two. I’d suspected that would be his decision. This is the part I knew would hurt.

As he increased his pace I hung just behind him at a 5 – 10 yard gap. If I got closer than 5 yards I’d coast. Coasting on a nice bike makes a distinct sound and can be heard from a short distance. The sound is so distinct that unless the cyclist was deaf he knew that someone was behind him, not drafting, but coasting. This happened when we came off a downhill and began the uphill or when I inadvertently got too close.

What I wanted to do was present the image of an old fellow out for a leisurely ride that just happened to be riding the same direction as the puffed-up fellow. I also knew if the guy really was in shape I’d only be able to keep this up for a few miles.

Actually, he was really, really good. His leg spin was flawless; he was smooth and not even a tad squirrely on his bike. After five miles I thought that maybe I’d ride beside him and introduce myself. I didn’t. I was a little embarrassed. I kept my distance.

I wasn’t too sure where we were and I knew now I had a pretty long ride home. He’s made a turn off my normal route. I’m still learning the back roads here.

Eventually, I pulled off onto a road that I hoped would put me on a path home. I’d been playing this game for six miles. I wasn’t hurting as much as I thought I’d be by this point. However, I was hurting. The guy did turn out to be a good rider, held a steady pace, and would have been easy to ride with. I regret not introducing myself. I lost a potential person to train with. But, the game was fun. (At least in my head)